In October 2009, men and women of the 3 RIFLES Battle Group arrived at Camp Bastion, Afghanistan. As part of Operation Herrick 11, they were a force of 600 soldiers from 3rd Battalion The Rifles, supported by gunners engineers and medics from other British Army units.

Their mission was to maintain control of the fertile upper Helmand valley around the town of Sangin and the strategically important Kajaki Dam. In total, over 1,400 people would spend almost seven months denying the Taliban access to populated areas, winning the trust of the Afghan people and encouraging the local economy to grow.

It was a challenging tour for 3 RIFLES. By the time they handed responsibility to 40 Commando in April 2010, 30 lives were lost and more were wounded, some seriously.

The DLI and The Rifles

The Durham Light Infantry is one of the antecedent regiments to The Rifles and Durham soldiers have a history of serving in Afghanistan and the surrounding region, the DLI having been posted there at different points in the 19th and early 20th centuries.

What online resources are available?

In addition to objects relating to these historic campaigns, interviews and oral histories from those who served with 3 RIFLES in Helmand have contributed to this exhibition, many of them from County Durham. 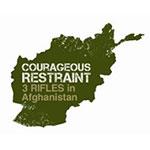