Earlier in 2022, we asked for your views on plans to introduce a PSPO that will ban certain behaviours which have a negative effect on the local environment and the experience of other visitors to this popular spot and Area of Outstanding Natural Beauty (AONB).

Thank you to everyone who took part. We received 71 responses to the public consultation, from a wide range of partners and members of the public. 84.5% of respondents either agreed, or strongly agreed, with the proposal to introduce a PSPO.

A PSPO has now been introduced which is enforceable between 1 April and 30 September each year, for the next three years. More detail can be found about the PSPO on our Enforcement powers for anti-social behaviour at High and Low Force page.

PSPOs are put in place so that people can use and enjoy public spaces safely, away from anti-social behaviour. Anyone who fails to follow the rules in a PSPO, without a reasonable reason, is committing a criminal offence and can receive a fine (Fixed Penalty Notice). We have the power to give out a PSPO under the Anti-Social Behaviour, Crime and Policing Act 2014.

Low Force, High Force, Gibson's Cave and their surrounding areas are well regarded for their natural beauty and offer a special experience for those wishing to experience some of the country's rarest nature. The area is a Site of Special Scientific Interest, part Natural Nature Reserve and is in the North Pennines Area of Outstanding Natural Beauty (AONB) and UNESCO Global Geopark.

The area has seen a large growth in visitors since the first lockdown in spring 2020. Most visitors are well behaved, but unfortunately, there has been an increase in anti-social behaviour that is affecting this fragile and special environment and spoiling the enjoyment of the majority of users. There is a concern that the warmer weather will bring a third summer of issues if further action is not taken.

The issues experienced since March 2020 include:

What we already have in place

Since 2020, we have worked with a range of people, including land owners, the Police and Fire and Rescue services, Natural England and volunteers from the AONB and Upper Teesdale Agricultural Support Services (UTASS) to reduce the impact of this behaviour. We have:

This year, staff will again be working at busy times, particularly bank holidays, to support where necessary in education, prevention and enforcement.

What we are proposing

Map of the proposed PSPO area

The land is owned by the Raby and Strathmore Estates and the area has general informal public access which is arrived at along public footpaths. 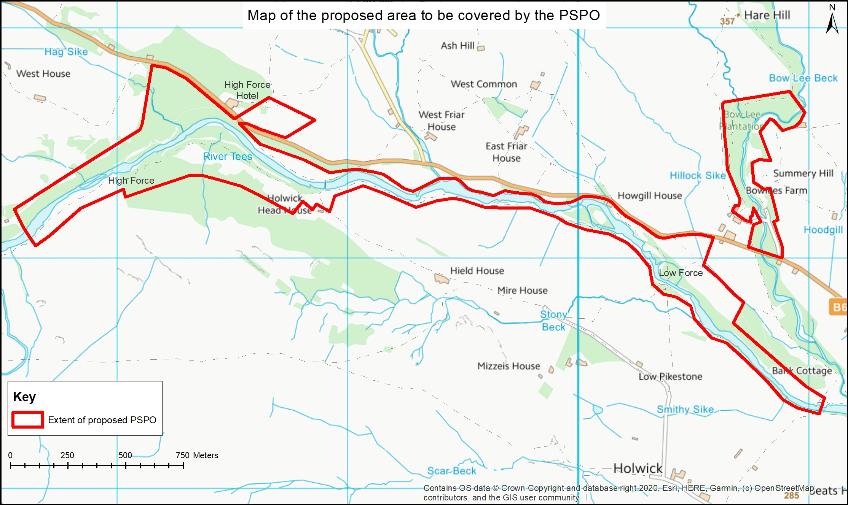 What the PSPO would mean for visitors

The order, which will last for three years, will make the following activities an offence within the proposed area:

The PSPO will be used by us and the Police together with other methods such as education, to ensure the local environment is protected from damage and all visitors can enjoy their experience.

We sought views from the local community and visitors and other interested parties including: