PSPOs are put in place to make sure that people can use and enjoy public spaces safely away from anti-social behaviour. We have the power to make a PSPO under the Anti-Social Behaviour, Crime and Policing Act 2014.

Following consultation in 2019, a PSPO came into force for three years which bans drinking alcohol in a specific part of Durham City. The order means that if we believe that people are drinking alcohol in this area (or anything which is reasonably believed to be alcohol) we have the power to stop them and take it from them.

We are proposing to extend this order for a further three years until 30 June 2025 and want your views as part of a review, before a decision is made.

We have been asked to consider the introduction of a new order to make aggressive begging in the Durham City centre an offence.

We appreciate we have genuine people who are homeless and require support. We have good and effective services in Durham to support people who are rough sleeping and they are encouraged to take up this support.

This order would not be targeted at those people who are begging in a peaceful manner but at those whose actions may be viewed as aggressive, intimidating or threatening by the person being approached for money, such as:

The area the PSPOs cover

Both PSPOs would cover the same area. 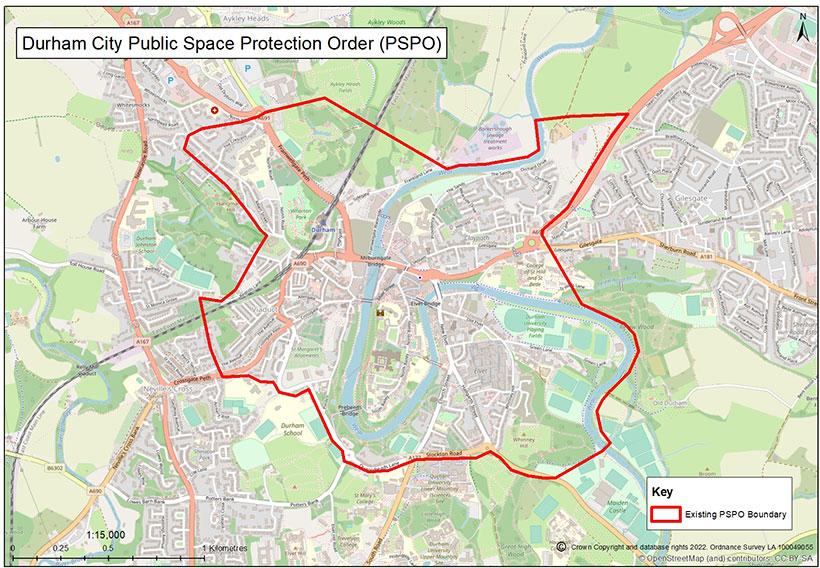 We want to hear all views regarding the PSPOs including:

We are seeking the views of local residents, visitors, businesses, rough sleepers, charities that support rough sleepers and other interested parties including the police and the City of Durham Parish Council.

Your comments on the PSPO for alcohol will form part of the review and if supported, will be introduced by 30 June 2022.

The proposed order for aggressive begging will be considered during spring/summer 2022 and if supported, it would be introduced by summer/autumn 2022.