This page gives information about units and provides advice about low-risk/higher-risk drinking and binge drinking.

If you are concerned about your own drinking or worried about a family member or friend, help and support is available through County Durham drug and alcohol recovery services.

We mention 'units' on this page a lot, so here is a re-cap of what a unit is. 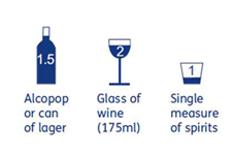 One unit of alcohol is 8mg (10ml) of pure alcohol. The number of units in an alcoholic drink depends on the type of drink, how strong it is and the size of the measure.

Lower-risk drinking can be described as drinking in a way that is unlikely to cause yourself or others significant risk of harm. The Government advises that:

To keep your risk of alcohol-related harm low, the NHS recommends:

Regular or frequent drinking means drinking alcohol most weeks. The risk to your health is increased by drinking any amount of alcohol on a regular basis. If you drink less than 14 units a week, this is considered low-risk drinking. It's called 'low risk' rather than 'safe' because there is no safe drinking level.

High-risk drinking can be described as drinking at levels that bring about significant harm to your physical and mental health and at levels that may be causing substantial harm to others. Examples include; liver damage, cirrhosis, dependence on alcohol and substantial stress or aggression in the family.

Women who drink heavily during pregnancy put their babies at risk of development of foetal alcohol spectrum disorder. These disorders lead to lifelong intellectual and behavioural problems for their child.

Binge drinking is essentially drinking too much alcohol over a short period of time. Typically, this type of drinking leads to drunkenness. Alcohol tolerance can vary from person to person and the speed of drinking in a session can also alter alcohol's effects. Drinking too much, too quickly on a single occasion can increase your risk of: