A city, towns and villages are celebrating after winning honours in a regional contest which recognises areas being kept colourful and inviting to residents and visitors alike. 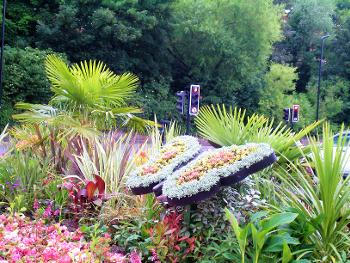 Durham City won gold in the Small City category at this year's Northumbria in Bloom awards.

Durham City, supported by us, won gold in the Small City category at this year's prestigious Royal Horticultural Society (RHS) Northumbria in Bloom competition. Judges visited Durham in the summer and were particularly impressed by the floral displays on its busy roundabouts.

The city has been a long-standing supporter of the In Bloom competitions for over 30 years. Durham City has won either the Best Large Town or Best Small City trophy for 18 of the last 23 years. In recent years, the whole county has developed its community involvement work in relation to the awards in order to build on its success.

Sedgefield won gold in the Small Towns category. Stanley, supported by Stanley Town Council, claimed the silver gilt to win the Large Towns section. Chester-le-Street took silver in the same category, the town's entry being led by us. Seaham took gold in the Coastal Resort group and Belmont was awarded silver for Urban Community.

Seaham Town Park and Wharton Park were both awarded gold in the Best Park section.

Three community champions were awarded for their outstanding contribution over several years in support of Northumbria in Bloom. Headteacher at Durham Gilesgate Primary School Mark Turner, Debra Rogan of the Just for Women Project and Ken Neat, chairman of the Friends of Belmont Scrambles, were all honoured.

Cllr Mark Wilkes, our Cabinet member for neighbourhoods and climate change, said: "Well done to everyone who has been involved in winning awards for the county at this year's competition. The success is well-deserved and is thanks to the hard work of our staff and volunteers, who are committed to keeping the county looking so vibrant.

"It's great to see people taking so much pride in our communities and long may it continue."

Northumbria in Bloom was set up as one of the founder regions of the national Britain in Bloom competition in 1964. The awards recognise, encourage and reward community groups who work together to transform their village, town or city through gardening, environmental awareness and community support.

Find out more information on Northumbria in Bloom.

Find out more details about Durham in Bloom.