The official countdown to the 2025 Stockton & Darlington Railway (S&DR) bicentennial celebrations has today (27 September) begun, as the new brand was unveiled for the anniversary to mark three years to go. 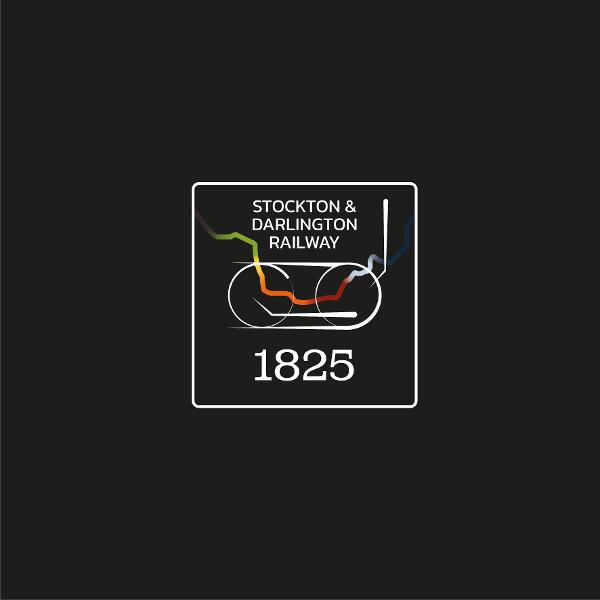 The new brand for the Stockton and Darlington Railway's bicentennial celebrations

The design will be familiar to the public and rail fans alike, representing the original steam engine, the 26-mile rail line between Witton Park and Stockton, and a historic two-hole sleeper stone. It will be used to promote the festivities taking place for the bicentenary.

Opened on 27 September 1825, the S&DR's combination of steam locomotives with a mainline and branches open to the public, and carrying a wide range of goods and passengers, made it unique. The S&DR's vision of an ever-expanding network and its influence in inspiring engineers from across the UK, Europe and the USA, transformed society, trade and transport across the globe.

At the heart of the celebrations are plans for a recreation of the inaugural journey from Witton Park via Shildon and Darlington to Stockton using the replica Locomotion No.1. This will lead to the launch of a permanent visitor attraction linking museums and historical sites across the line as well as a number of other commemorative activities.

It is hoped the activity will also trigger dozens of mini-carnivals, parades and celebrations across communities right along the route, and a programme of outdoor theatre, visual arts and events will also be produced.

Cllr Elizabeth Scott, our Cabinet member for economy and partnerships, said: "The modern railway was born right here in our region on 27 September 1825. It is really exciting, on the anniversary of that date, to be looking ahead to celebrations to mark the bicentenary of that historic moment.

"The Stockton and Darlington Railway transformed the way people and goods were transported. The programme of activities we have planned just three years away in 2025, drawing on local creativity and talent, will show that that innovative spirit of 1825 is still very much alive."

To find out more about the celebrations, register for updates at the newly launched website www.SDR200.org

Niall Hammond, Friends of the Stockton & Darlington Railway, said: "We're thrilled that several years of work by a wide range of partners and funders is now beginning to deliver a fantastic event for 2025 and a lasting, permanent visitor attraction for the years beyond. We expect the world class heritage of the S&DR to inspire our communities and to attract an international audience to help us celebrate the railway that got the world on track."

Sir Peter Hendy, Chair, Network Rail & London Legacy Development Corporation and Trustee, London Transport Museum & Science Museum Group, said:"The opening of the Stockton and Darlington railway represents the start of the era in which railways began to connect our family of nations and diverse communities across the United Kingdom. The 200th anniversary of this event is a historic moment and one which I'm pleased to see the Durham and Tees Valley Authorities are marking in such a positive way and which will form an important part of planned national celebrations."

The bicentenary celebrations are being delivered by the S&DR Railway Heritage Partnership, which includes us, the Tees Valley Mayor and Combined Authority, Darlington Borough Council, and Stockton-on-Tees Borough Council, working alongside National Railway Museum, Historic England, Network Rail, the Friends of SDR and others.