Hardwick Park is an 18th century Grade II listed site with many historical features to discover.

Throughout national lockdown, Hardwick Park is open, although from Thursday 14 January, the café is closed.

Please follow government guidance and only use our parks to exercise by yourself; with the people you live with; with your support bubble; in a childcare bubble where providing childcare or, when on your own, with one person from another household.

Our gift shop and exhibition area are also closed.

Please stay local to your home and only exercise once a day.

In the 18th century, John Burdon set about transforming the Hardwick Estate into his own pleasure grounds. To help him achieve his vision he employed James Paine, a leading architect of the time. Their grand plan was to create a garden that, although heavily engineered, was meant to look completely natural. It was a huge step away from the formal gardens of the past. Paine created ornamental buildings, ruins, lakes and woodland which looked like they had always been part of the landscape. Even the serpentine (the smaller lake) was created to look like a river flowing through the park.

The buildings and structures in Hardwick Park were designed to be experienced from a circuit walk, set around two artificial lakes. Classical buildings (their styles becoming more complex and decorative as the route progressed) alternated with Gothic structures. The classical buildings, with dark and gloomy surroundings, were carefully finished and situated in open areas, while the Gothic Structures were roughly finished and designed to look old and ruined. Each structure was sited to link with the others.

By the late 19th century, Burdon's estate fell on hard times. The buildings disappeared, the lake silted up and the magical views became overgrown with trees and undergrowth until 1999 when we embarked on a project to return the grounds to their former glory.

The project came about thanks to a £4.1m grant from the Heritage Lottery Fund and the reconstruction and restoration of four gothic ruins, The Temple of Minerva, the Gothic Ruin, the Gothic Seat and the Bono Retiro began. 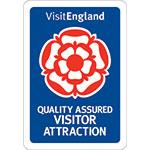