A prestigious County Durham awards ceremony will be held in person for the first time since before the coronavirus pandemic. 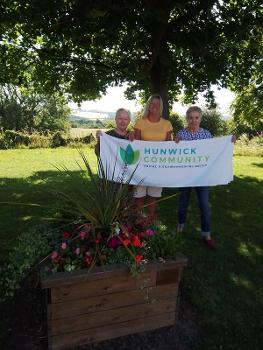 Hunwick Community Social and Environment Group at the launch of this year's nominations.

Nominations are now open for our 33rd County Durham Environment Awards, which will return in person early next year after ceremonies for 2020 and 2021 were held virtually.

Hosted by the County Durham Environment Partnership, the awards recognise the county's community groups, individuals, businesses, and organisations that have gone the extra mile to improve their local environment in a sustainable way.

The nominations for 2022 have been officially launched by last year's Places and Spaces award winners, Hunwick Community Social and Environment Group.

Initially set up with the aim of keeping the village pretty and clean, the group began with regular litter picks and has gone from strength to strength since.

The group was also awarded funding from the National Lottery to create a wildlife trail and run a community project to build raised planters and, this summer, was entered into the Northumbria in Bloom competition.

Jacolyn Priestley-Jayes, of the group, said: "We were very pleased to be nominated and to win this award last year. Our aim is to enhance the village we live in, making it a safe, attractive environment for villagers and wildlife alike and somewhere which we can all be proud of."

Preserving and protecting the environment

Cllr Mark Wilkes, our Cabinet member for neighbourhoods and climate change, said: "We are delighted to be able to hold the County Durham Environment Awards in person once again.

"We have a whole host of individuals, businesses and organisations across the county who are doing incredible things to preserve, protect and enhance the environment, so we are looking forward to bringing these amazing people together to celebrate their achievements.

"The awards recognise projects that demonstrate great design, environmental guardianship, and community spirit across the county. With the threat of climate change becoming even more prevalent, it is more important than ever that we celebrate the environmental achievements of our county while encouraging more people to take their own action in whatever way they can."

Nominations can be submitted until Friday 30 September for a group, school, business, or individual who has gone above and beyond for the environment.

Go online for for more information and to submit a nomination.