The largest local authority in the North East is celebrating rounds of success after being recognised three times for its work to tackle climate change. 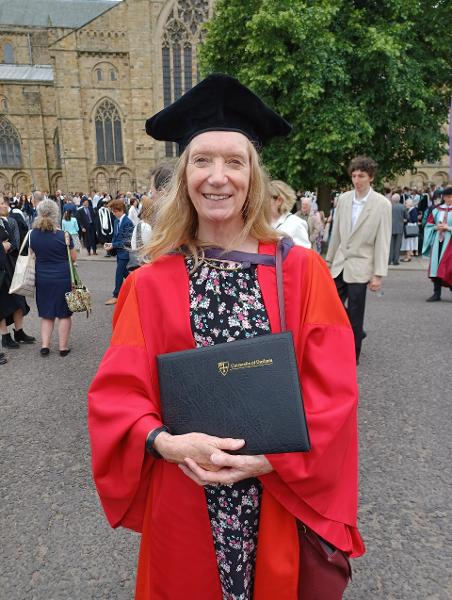 Our staff attended a ceremony at Durham University to celebrate team leader, Maggie Bosanquet, as she was awarded an Honorary Doctor of Science for her commitment to sustainability.

We were also a finalist in two categories in this year's national MJ Awards, which recognise local authorities for the delivery of their services.

An environmental campaigner since 1989, Maggie has led our climate change team for 27 years, working to deliver a multi-million-pound programme of sustainability, energy, and carbon initiatives.

Part of the honour was for her role in establishing innovative and effective links with the university and the Durham Energy Institute (DEI) on which she is an advisory board member, working with students and researchers to develop pioneering schemes.

Cllr Mark Wilkes, our Cabinet member for neighbourhoods and climate change, said: "I would like to say a very big congratulations to Maggie for her richly-deserved honorary doctorate. She is a passionate leader that nurtures real creativity in teams that work for her, and has used her networking abilities to become a national influencer in her field and the fight against climate change."

Jon Gluyas, director of the Durham Energy Institute, said: "Maggie has created and led a phenomenally effective 'low carbon team' at Durham County Council since before we met some eight or nine years ago; a team acknowledged by the UK government's Department for Business, Energy and Industrial Strategy as nationally leading in the quest for zero carbon.

"Maggie's contribution to the development and success and mission of Durham Energy Institute is also without parallel. Maggie is currently serving her third term as an advisor to DEI, and has been an advocate for the work we have doing on decarbonisation of heat."

Teams also had a night of success at the MJ Awards, after winning Best Electric Vehicle Charging Project.

This achievement praised us for our work on the Scaling of On Street Charging Initiative (SOSCI), which has so far seen 153 electric vehicle charge points installed across the county, particularly in rural areas.

The SOSCI project aims to support the county's residents who are looking to switch to an electric vehicle, but live without off-street parking, by enabling them to be within five minutes' walk of a charge point.

We were also the highly commended finalist in the Digital Transformation category, for its initiative to use technology to tackle litter.

In the last year, the authority has issued over 1,000 Fixed Penalty Notices (FPNs) for littering.

To combat this and promote positive behaviour, we have developed an e-learning course offered as a voluntary alternative to the FPN, which can be completed online and is similar in principle to speed awareness courses offered by police forces.

Cllr Wilkes added: "We are absolutely delighted to have been recognised in two categories for our commitment to tackling environmental issues. The MJ Awards are a prestigious accolade within the public sector, so to have so much success in both categories is a real achievement for our teams working on the SOSCI project and litter initiative."