A County Durham man has been ordered to pay £1,000 after being caught on CCTV dumping a mattress, car seat and wood at the side of a road.

We took legal action against Jordan Bolton, from Ascot Place, Pelton, after one of our neighbourhood wardens found the flytip at High Urpeth, in May last year.

The area near Beamish, which has experienced flytipping over the years, has signs warning people of the consequences of flytipping and CCTV cameras operating. 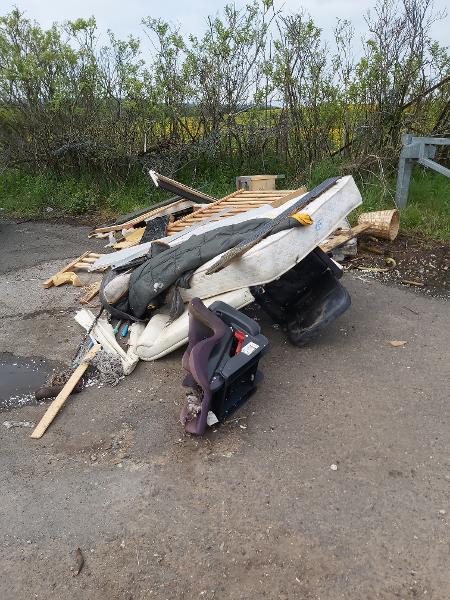 Whilst reviewing the CCTV footage, the warden observed two men exiting a recovery truck before throwing the items from the back of the vehicle and onto the side of the road, despite cars passing at the time.

Although both males were seen to be removing the waste, Bolton was the more active of the two.

He was later identified by a warden with assistance from a Police Community Support Officer (PCSO) from Durham Constabulary, while further checks showed his father to be the insured driver of the vehicle.

In July last year, a letter was sent to Bolton and his father, requesting that they assist with an investigation into the offence, which they failed to respond to. Twenty-six-year-old Bolton also failed to attend an interview with the warden, resulting in his prosecution.

At Peterlee Magistrates Court, Bolton pleaded guilty to flytipping. In mitigation, his solicitor said he was helping someone who his father had paid to dispose of the waste and described his actions as thoughtless.

Ian Hoult, neighbourhood protection manager, said: "Flytipping is a very serious offence and something we know residents feel strongly about. That is why we are determined to do everything we can to tackle it. It can cause environmental damage, impacting on our stunning countryside, and can block access to roads and land.

"With so many ways to dispose of waste responsibly, this case was completely avoidable and highlights the need to carry out checks on anyone who is paid to dispose of waste. We hope it sends a clear message that we will take legal action against anyone involved in the illegal dumping of waste."

For more information about flytipping and how to report it, visit our Flytipping page.