A County Durham man has been ordered to pay over £800 after he was caught throwing rubbish over his neighbour's wall. 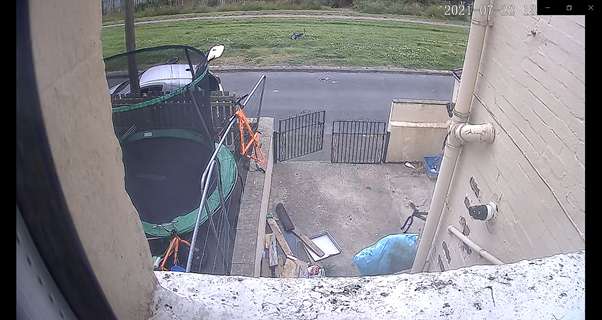 CCTV footage of the waste fly tipped by Hunt

We took legal action against Alan Hunt, of Eden Terrace, Stanley, after his neighbour saw on CCTV that he had been dumping household items in the grounds of their property.

The waste consisted of two bicycles, a paddling pool, a pillow, a mattress, bags of rubbish, a bike chain, a fruit and vegetable crate, half a gate, empty tins of food and general waste.

The neighbour contacted a neighbourhood warden who, after reviewing the CCTV footage with police, identified Hunt and confirmed his place of residence through the council tax register.

Hunt, 21, was issued with a fixed penalty notice of £400 which was unpaid and resulted in his prosecution.

We have also taken legal action against a woman whose vehicle was used to fly-tip waste.

Loreen Smith, of Lake View, Wingate, appeared at Peterlee Magistrates Court after we were contacted by a woman whose waste had been collected and later fly-tipped at a nature reserve.

The woman explained to our neighbourhood wardens that she had paid a man £300 to remove a large amount of waste from her home and was told it would be disposed of correctly at a recycling centre.

The next day, the woman was contacted by someone on Facebook advising that her waste had been found fly-tipped at Crowtrees Nature Reserve, near Coxhoe.

The neighbourhood warden carried out a check of the waste carrier's licence, which was found to be registered to a removal company, and a vehicle check showed it was registered and insured to Smith.

The vehicle was seized by us and was found to be filled to the roof with waste that had been collected.

As the only registered keeper of the vehicle, Smith was issued with a Section 108 Environment Act Notice requiring her to attend our offices to assist the warden in their investigation. Smith did not attend and had no further contact with the council.

A claim was not made to the vehicle after it was seized, so, due to the age of the vehicle, it was later crushed.

Smith, 44, pleaded guilty to the charges of knowingly causing the waste to be deposited and was ordered to pay a fine of £100, victim surcharge of £34 and £400 costs.

Ian Hoult, Durham County Council's neighbourhood protection manager, said: "We treat fly-tipping as a very serious offence. Not only does it cause environmental damage to our stunning county, impacting our countryside and open areas, but it can block access to roads, pathways, and land. We know that fly-tipping is a significant concern among our residents, and we want to do everything we can to tackle it.

"I'd also like to remind people that their waste is their responsibility. These incidences of fly-tipping were both avoidable and highlight the importance of ensuring waste is disposed of correctly, as we will take legal action against those who are involved in the illegal dumping of waste."