Hundreds of businesses from across the North East have backed County Durham's bid to be UK City of Culture 2025. 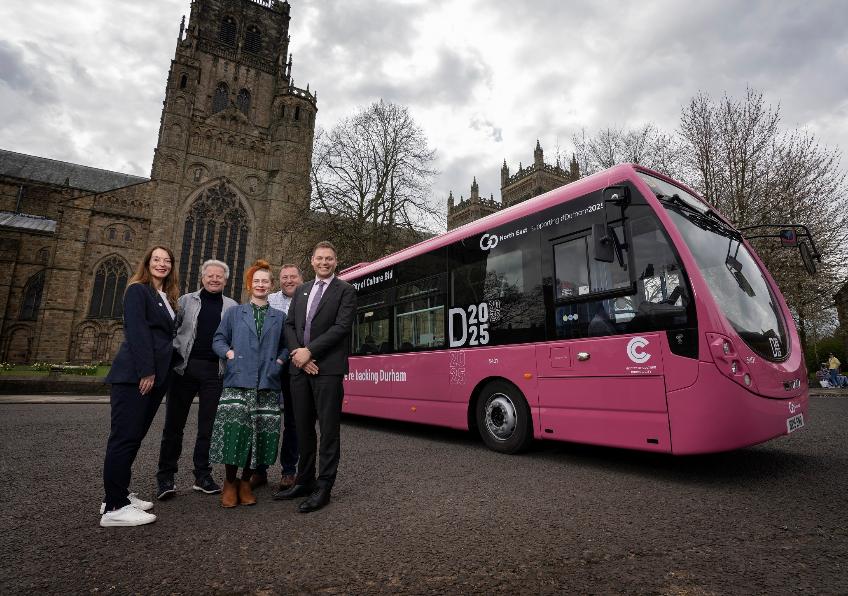 Almost £500,000 in sponsorship has also been pledged towards the Durham 2025 campaign, while other businesses have volunteered their skills and time to help develop and raise awareness of the bid.

One business that has gone the extra mile is Go North East, which has wrapped one of its buses with Durham 2025 branding

Featuring bright colours and an eye-catching design, the bus will help to spread the word about the bid across County Durham, Sunderland and Newcastle.

Martijn Gilbert, managing director at Go North East, said: "We're delighted to be showing our support for the Durham 2025 bid with our very own branded bus.

"The bus will help raise awareness of the bid across the region, shining a light on everything that County Durham has to offer.

"For over 100 years, Go North East has connected the region's towns and villages with County Durham and the city of Durham, and many other key locations beyond, helping to keep the people of the North East connected and on the move.

"We can't wait to see what the future has in store for the rich culture and tourist appeal of our region."

County Durham's shortlisted bid to be UK City of Culture 2025 is being driven by the council, Durham University and Culture Durham, a partnership of more than 20 cultural organisations from across the county.

Sally Dixon, assistant director of partnerships and communications at Beamish Museum, has been leading on business engagement for the bid.

She said: "Our message has been all about collaboration from day one; businesses working together with cultural partners to deliver social and economic benefits for County Durham and the wider North East. It's been really well received as businesses can see just how powerful this opportunity could be for the region.

"We've had a tremendous response so far, with almost 600 businesses signing up to back the bid and almost £500,000 pledged in sponsorship.

"But it's not only about cash support - there are exciting opportunities to explore bespoke and in-kind partnerships. The liveried Go North East bus is a fantastic and creative example of how a business can give in-kind support to Durham 2025.

"We're looking forward to developing many more partnerships like this in the future, to make Durham 2025 as impactful as it can possibly be."

Last month, County Durham was one of just four places from across the UK to make the shortlist for UK City of Culture 2025. The winner is expected to be announced in late May and, if Durham is successful, it will be the first time a county has held the title.

The benefits of securing UK City of Culture status for County Durham and the wider region cannot be overestimated.

It would create an additional 2,500 jobs in Durham's creative industries and an extra 200 creative enterprises in the county by 2029; directly supporting almost 1,000 businesses and organisations; and creating a £41.5 million spend with at least 50 per cent of contracts going to local suppliers.

It would also attract more than 15 million visitors to the region, many of whom would stay overnight, helping to bring an additional visitor spend of £700 million and supporting the creation a further 1,800 jobs in the tourism sector.

And with the county's profile and appeal raised nationally and internationally, the benefits of being UK City of Culture 2025 would be felt for years to follow.