Residents in County Durham can now hire an electric vehicle for the day, as part of a new car club service. 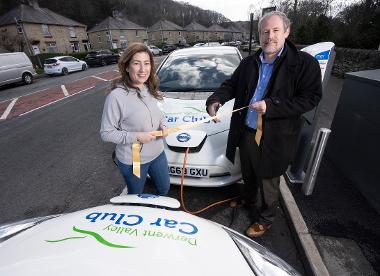 We have been working with Derwent Valley Car Club to help it launch a new electric vehicle hire service in Shotley Bridge.

The car club has three fully electric cars available to borrow, which residents can hire for an hour up to a full day.

It costs £5 a month to join the scheme and the hire rate is £4 per hour for the first three hours, then £3 for every hour after that, or £30 to hire the car for a day. There is no geographical limit as to who can join the scheme.

Volunteer drivers from the club are also available to use the car to take people to hospital appointments.

In conjunction with the launch, an electric vehicle charge point has been installed on Front Street in Shotley Bridge, where one of the vehicles is based. The remaining two vehicles are based in Rowlands Gill and Blackhall Mill.

The electric vehicle hubs have been funded by Scaling On-Street Charging Infrastructure (SOSCI), which has given money to allow us to install a minimum of 100 electric vehicle charge points across the county.

We are also asking residents to take part in an electric vehicle car club survey to establish the need for the scheme across the county, with a view to rolling it out to other areas.

He said: "We are delighted to have been able to work with Derwent Valley Car Club to help it launch its electric vehicle car club scheme. Every car club vehicle can remove up to 20 non-electric cars off the road and will create a new option for residents who are looking to switch to greener modes of transport.

"The service has been set up particularly to help families who have returned to workplaces on a hybrid-basis, where they no longer need to run two cars every day and can borrow an electric vehicle as they need from the club.

"Over time we hope to be able to roll this scheme out further across the county, working with partners like Derwent Valley Car Club which are doing a truly amazing job."