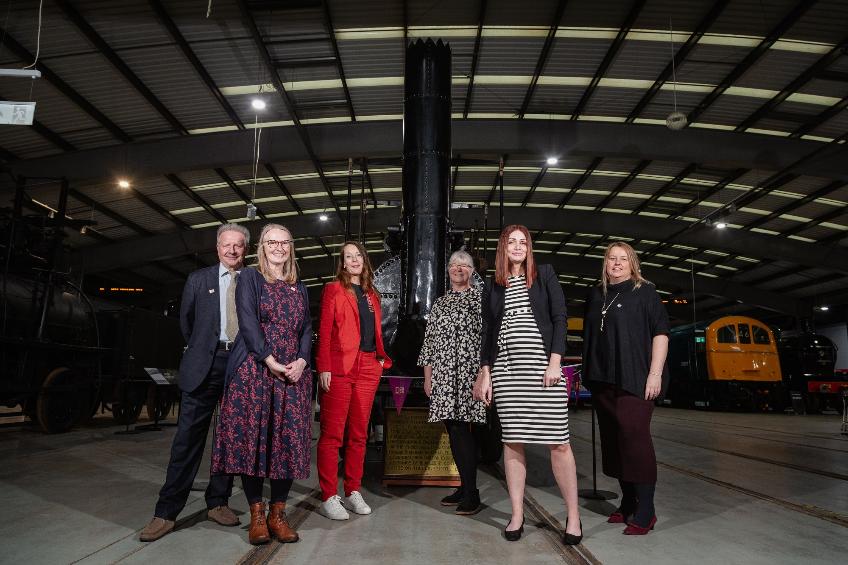 Representatives of some of the partners in our shortlisted City of Culture bid at Locomotion, which is central to our ambitions to host the headquarters of the Great British Railways

That is our message, having submitted a bid to house the new national rail body in County Durham in conjunction with our quest to be UK City of Culture 2025.

The Government launched a competition to identify a location outside of London for the GBR headquarters last month, as part of its levelling up agenda. The winning location will benefit from investment and the creation of highly skilled jobs, helping to spread opportunities across the UK.

Towns and cities with strong links to railways have been encouraged to enter the competition and, for County Durham, there is no shortage of connections. Not only is it home to Shildon, the world's first railway town, but it is a major player in the future of the industry, with the next generation of high-speed trains being built at Hitachi Rail Europe's Newton Aycliffe factory.

Locomotion museum in Shildon, meanwhile, tells the story of County Durham's role in the early development of the railways and attracts visitors from around the world. And thanks to a £5.9m redevelopment, it will soon house the largest museum collection of historic rail vehicles in Europe.

The creation of GBR comes at a special time for County Durham and the wider region. Preparations to mark the 200th anniversary of the Stockton and Darlington Railway in 2025 are well underway. Steam train journeys, exhibitions, parades and arts and theatre events are just some of the highlights in store.

County Durham's rail heritage is also an important theme within Durham's countywide bid to be UK City of Culture 2025. Earlier this month, the county was one of just four locations to be shortlisted for the prestigious title from the 20 places that applied.

Cllr Elizabeth Scott, our Cabinet member for economy and partnerships, said: "We believe County Durham would provide the perfect home for GBR and that this offers a brilliant opportunity to build on our historic links to the rail industry.

"The timing of the competition could not be better for County Durham, with our bid to be UK City of Culture 2025 still very much on track. Together with our partners at Durham University and Culture Durham, the bid draws upon our rail heritage - and the spirit of innovation at its core - to champion growth and creativity.

To find out more about County Durham's bid to be UK City of Culture 2025, visit the Durham2025 website or follow the Durham 2025 social media accounts at www.facebook.com/Durham2025, www.twitter.com/durham_2025 or www.instagram.com/Durham2025

"Housing the GBR headquarters in County Durham complements this aim and would bring hundreds of skilled jobs to the area. This is a key priority emerging from our Big Econ-versation, which is engaging residents and businesses in developing a new inclusive economic strategy for the county.

"County Durham's role in the development of the railways is not just confined to the history books, it is happening now, and that is why we are the ideal choice for this investment."

GBR is a new public body that will oversee rail transport in the UK from 2023, replacing Network Rail as the operator of rail infrastructure. It will also control the contracting of train operations and the setting of fares and timetables for most of England.

Jim Brewin, head of UK and Ireland, Hitachi Rail, said: "Hitachi Rail's investment in County Durham has delivered tangible regional growth but I believe rail can have an even greater role in levelling up the North East and encouraging UK innovation. GBR's headquarters can be that economic driver.

"Considering GBR will have a vital role in achieving Net Zero by 2050, it makes sense that it becomes part of the innovative green technology hub that is emerging here in the North East.

"If GBR wants to deliver levelling up and capitalise on the UK's Net Zero future - its home has to be County Durham."