A County Durham builder has been jailed after he admitted carrying out a fraud which has left his victims tens of thousands of pounds out of pocket. 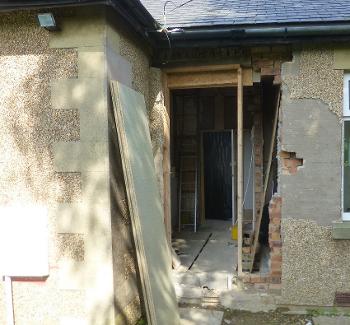 How Stephen Loughlen left one home after failing to complete work.

Stephen Loughlen, trading as Newcastle Facilities and Maintenance Ltd, took money from customers to do work on their homes but failed to complete the agreed work, often using bad weather as an excuse.

One customer paid Loughlen £61,000 for an extension to her property, only for the work to stall over a period of months. After our Trading Standards team launched an investigation, the true value of the work undertaken was found to be just £14,083.

Another victim paid Loughlen over £56,000 for work on her home, but the work was sporadic with Loughlen providing a number of excuses such as blaming wind and rain. After being inspected the work was found to have been worth just £28,418.

The victim never received the roof trusses, the windows, the internal doors, roof tiles, external wall tiles, and combi boiler, all items which the defendant claimed to have purchased with the money paid to him.

Loughlen's final victim paid him £52,000 for work on her house which he said would be completed by Christmas 2018, although its true value was just £22,757. With progress slow, in July 2019 Loughlen emailed the victim to say he was not completing the work, leaving her with a loft and roof that were open to the elements, plaster falling from the ceilings and the house and garden in a dangerous state.

The victim was forced to use money from her husband's pension to engage another builder to finish the project started by Loughlen. During the investigation officers discovered that a large amount of the money paid by the victims had been spent on gambling instead of being spent on the projects.

When interviewed by Trading Standards officers, Loughlen confirmed that he had undertaken the work, provided the quotes and took money from the three complainants. In a hearing at Durham Crown Court in November 2021, he pleaded guilty to six counts of fraud on behalf of himself and his company amounting to a total of £110,924.90 between February 2018 and July 2019.

The case was then adjourned. During his sentencing hearing, the court heard in mitigation that Loughlen had developed a gambling problem around the time of the offences. Although he spent money on labourers and materials for the work, more went on gambling and he was losing more money than he was bringing in, putting himself in an 'increasingly desperate situation'.

Since pleading guilty he has tried to raise funds to pay back his victims. Proceeds of Crime Act proceedings will now commence in an attempt to identify funds to repay his victims.

Owen Cleugh, our public protection manager, said: "Unfair commercial practices such as the ones demonstrated in this case are unacceptable and not only leave consumers out of pocket, but can cause a great deal of stress and worry to the victims.

"The case should act as a reminder to traders that they have a responsibility to act fairly and honestly and, if they fail to do so, they should expect to face the consequences."

Find out more about Trading Standards and how to report concerns about unfair commercial practise at our trading standards page.