A primary school is set for a greener future after renewable energy works were put in place following a grant of more than £100,000. 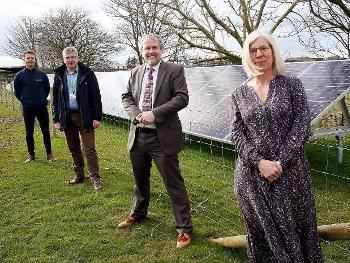 From left, Mark Dunville, of AR Power, Malcolm Johnson, our energy conservation advisor, Cllr Mark Wilkes, our Cabinet member for neighbourhoods and climate change, and Clare Carr, headteacher at Woodland Primary School, next to new solar panels which have been installed at the school.

Until recently, Woodland Primary School in Teesdale relied on an oil-fired boiler for both heating and hot water. The school was identified by us for the Public Sector Decarbonisation Scheme (PSDS) phase 2 funding, as the single boiler was towards the end of its useful life.

Grant funding via the Department for Business Energy and Industrial Strategy and Salix Finance saw £113,000 provided from the PSDS towards the scheme's total £122,000 cost. The remaining £9,000 was funded from the council's Invest to Save budget.

We had identified the need to move away from oil heating systems in rural schools in its Climate Emergency Response Plan and had already successfully trialled an air source heat pump in 2020 at a waste transfer station office.

The solar panels result in some of the power being generated on site whilst the conversion of lights to LEDs significantly reduces energy consumption from the existing school building.

The LED lighting retrofit concept involved replacing the internal elements of the school's existing fluorescent light fittings with LEDs. It is the first example of this solution in a school in County Durham and the first in a Durham County Council building.

Electricity consumption from lighting should now be around a third of previous levels, with the LEDs able to provide a brighter, crisper light, providing a more pleasant school environment.

Woodland Primary School is now the lowest carbon emitting school in County Durham and showcases how we can roll out carbon reduction projects. Carbon emissions of 22.1 tonnes per year have now been reduced to 4.9 and this figure will continue to reduce with time as the electricity grid is further decarbonised.

This could save the school over £1,000 a year on its energy costs.

Woodland Primary School headteacher Clare Carr said: "We are thrilled to have been chosen as the pilot school for the decarbonisation project in Durham. This has been a very exciting development and has engaged the children with the topics of climate change, carbon reduction and their role and influence in the future of their school, County Durham and the wider world.

"We are very proud to have been part of this project and we look forward to sharing what we have learned and the impact of the changes on the wider community."

Cllr Mark Wilkes, our Cabinet member for neighbourhoods and climate change, said: "The contractors have worked during through the coronavirus pandemic, which has been challenging, while the enthusiastic team at the school has embraced the concept and supported our low carbon team.

"I was particularly impressed with the children at the school. They have learnt so much about energy and protecting the environment because of this project.

"This demonstrates what is possible within 12 months of funding being granted and showcases how similar schemes can be rolled out across County Durham."