A national film festival showcasing and celebrating Ukrainian filmmakers and artists is coming to a County Durham venue later this month, with proceeds going to help the country's Red Cross organisation. 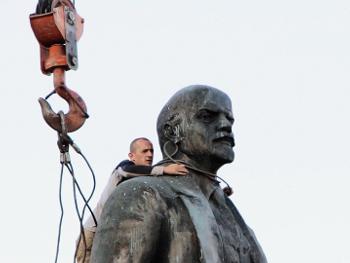 A still from The Fall of Lenin.

In light of the current situation in Ukraine following an invasion by Russian forces, the Encounters Film Festival has curated a programme of short films to provide audiences with a better understanding of the history of Ukraine.

The 70-minute programme will be shown at Gala Durham, which is operated by us on Wednesday 23 March.

The films will be screened from 5.20pm, with all proceeds from ticket sales to be donated to the Ukrainian Red Cross.

Cllr Elizabeth Scott, our Cabinet member for economy and partnerships, said: "Our hearts go out to the people of Ukraine who find themselves in an incredibly difficult situation at the moment.

"We appreciate that many of our residents are keen to offer their support to those affected, so we're pleased to be able to host this film festival from which funds will go towards helping the relief effort."

From a stylised sport drama, to a funky animated short about the body expectations that mostly befall cisgender women, the programme welcomes strong and unapologetic voices unafraid to make noise. Included in the line-up is The Fall of Lenin, an ironic documentary film about the farewell to the phantoms of the former USSR in Ukraine.

The spiritual session with the ghost of Lenin guides audiences through the past, present and future as the film presents and the twilight of idols, and the curious afterlife of history's ghosts.

Award-winning Weightlifter tells the story about professional weightlifter Petro, who is preparing for an important competition. Before the competition, Petro receives some tragic news and a hard decision rests on his shoulders. His inner conflict makes Petro into something more than just a mechanical bundle of muscles.

Released as part of Armed and Dangerous, a series which explores the militarisation of society and the attitude of Ukrainian youth to violence, Sisters sees the Members of the Sisterhood of St Maria of Egypt struggling for unequal rights. Can these beautiful and brave women save their traditional family values from the threats of the outside world?

Completing the line-up are Echo, My Fat A*** and I, Misha and Ukraine: Three Years of Truce.

How to book tickets