Teenager fined for attempting to overcharge for roof repairs

A teenager has been fined for trying to overcharge a man by over £1,500 for roofing repair work on his County Durham home. 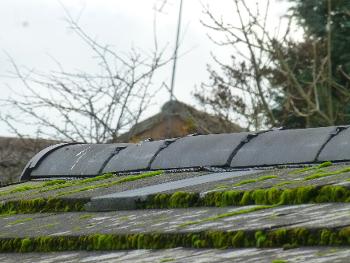 The roofing repair work which was carried out on the victim's home.

Johnboy Watson Harrop, acting under the name JH Rooflines, cold-called the victim at his home in Crook in August 2020, offering his services. The victim mentioned an issue with a rear bedroom ceiling, which showed a damp patch.

After inspecting the ceiling of the house, Harrop went on to quote a price of £2,100, providing an invoice which the resident agreed to pay. The following day, Harrop and two other men arrived to carry out roofing work.

The resident said the workmen arrived with no equipment and had to ask for ladders and a saw. Later that day the victim went to a bank to withdraw money to pay Harrop, but he was queried by a bank assistant, who then contacted the police.

Police attended the victim's home to find the two men present but Harrop not on site. One of the men rang Harrop, who attended a short time later for interview with the police.

An investigation was launched by our Trading Standards team, with a survey of the property carried out by an expert, who assessed the value of the work be just £500 in total. The works carried out by the defendant were deemed entirely unnecessary as it had not remedied the problem, which still remained an issue.

Harrop, 19, of Addison Road, Bishop Auckland, was charged with exerting undue influence on the consumer's circumstances in carrying out unnecessary roofing work on property and contravening the requirements of professional diligence. He pleaded guilty to both charges in a hearing at Peterlee Magistrates' Court.

In mitigation the court heard that Harrop was working on behalf of his father's business at the time of the offences and his father has now taken back control of the firm. His defence solicitor added that the offences were not sinister and that Harrop had got his budgeting wrong when agreeing the work on the house.

Joanne Waller, our head of community protection services, said: "The work undertaken in this case was significantly overcharged and unnecessary. It could have left the victim paying over £1,500 more than was needed to fix the issue at his property, which was still not remedied after Mr Harrop's visit.

"Our Trading Standards team will always seek to support legitimate traders and protect consumers, while taking the necessary action against those who mislead residents."