Art installations to go on display at Hardwick Park festival

Visitors to one of County Durham's historic parks will have the chance to experience a one-night-only art installation event. 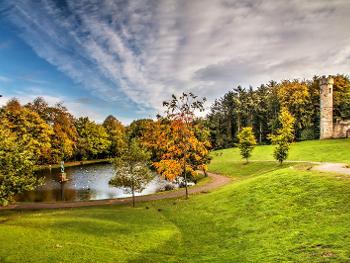 Hardwick Park, which will be transformed into a series of art installations

For the last 18 months, our community arts team has been working with composer and interdisciplinary artist Ed Carter to produce a free, awe-inspiring art and sound installation spanning across Hardwick Park in Sedgefield.

Drawing inspiration from work by 18th Century architect James Paine when it was formerly the private gardens of John Burdon, Ed has used the park's history and cultural themes to create pop-up installations of visual and sound artworks as well as live performances, which will be dotted around the park.

On the evening of Saturday 19 March, visitors will be able to attend the Festival of Minerva, named after the ancient Roman festival which took place on this date, and follow the trail to experience Ed's work.

With Hardwick Park's picturesque backdrop and dynamic history, the Festival of Minerva is just one example of how the county is an ideal place to host a variety of cultural events and supports its bid to become UK City of Culture 2025.

Following the circuit walk around the park's lake, the Festival of Minerva will feature installations such as music playing from the tower of the Gothic Ruin - created in collaboration with the Sedgefield Handbell Ringers.

Visitors will also be able to enjoy a serving of black cherry ice cream or blackcurrant flavour sorbet at the former Banqueting Hall, a delicacy traditionally served to its 18th century guests.

Other installations include an original piece of music performed by three oboe players at the Gothic Seat, inspired by John Burdon's coat of arms, as well as a perspective-defying infinity mirror installation by Studio Vertigo at the site of the former Bath House.

At the Bono Retiro, visitors will also come face to face with a second mirror by Studio Vertigo, filling what used to be the doorway that would have greeted visitors in John Burden's time. Behind the mirror will come the voice of poet Gillian Arnett reciting The Spider Poem, a new piece written for Hardwick Park.

Taking place by the Temple of Minerva, the festival's finale is inspired by the ancient poem Metamorphoses, written by Roman poet Ovid, which tells the tale of a weaving contest between Arachne and Minerva.

The finale will feature live poetry and music, finishing with a spectacular fireworks display. The live performances include Gillian Arnett, who will be reciting The Song of Arachnidaccompanied by an all-female chorus,and sopranoCarole King who will be singing over a harp duet composed by Ed Carter, which has been recorded inside the Temple of Minerva with harpists Venera Bojkova and Sarah Paterson.

The visitor centre will also be displaying large scale artworks inspired by Hardwick Park, produced by members of the U3A Photography Group and Sedgefield Scribes.

For more information about the Festival of Minerva, visit the Community arts web page.

The Festival of Minerva is free to attend and will take place on Saturday 19 March, from 5.00pm.

Visitors are advised to arrive no later than 5.30pm to allow time to follow the trail and gather on Temple Field for the event finale, starting at 6.40pm.

Ed Carter said: "I've absolutely loved my time here at Hardwick Park. The stunning location and the research I've delved into about the park's history, as well as the cultural themes introduced by architect James Paine, have offered so many avenues to explore.

"It's really interesting to think about the intentions that shaped those creative ideas, and it's been a wonderful opportunity to celebrate the rejuvenation of the park as it has evolved from a private garden into an accessible public space."

Cllr Elizabeth Scott, our Cabinet member for economy and partnerships, said: "We are very happy to have had Ed Carter as our first artist-in-residence at Hardwick Park. This is one of the most beautiful settings in the county, with some fascinating architectural features and stunning vistas, so we are delighted to be bringing the Festival of Minerva to our park visitors. It will be the first event of its type here, but hopefully not the last.

"With its fascinating trail of unique installations, each inspired by a different theme of the park's history, the Festival of Minerva will truly be and exciting night to remember and it is opportunities like this why the county is bidding for UK City of Culture 2025. If the county is successful in its bid, it will mean more funding and investment which will enable us to bring even more exciting opportunities like this to communities across the county."