More than 200 trees have been cleared from footpaths, roads and open spaces across County Durham following damage caused by Storm Malik. 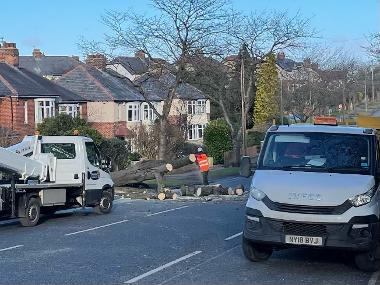 The storm, which hit the region the weekend before last, led to a major incident being declared by the County Durham and Darlington Local Resilience Forum's Strategic Co-ordination Group (SCG) after trees and power lines were brought down and a number of properties were left without power.

Our teams were called out across the weekend of the storm to address the issues and have so far attended to 220 trees across the county.

So far, around 50 staff have been dedicated to working on our open spaces to repair damage. However, it is estimated that the clean-up operation could take up to three weeks, with a further 120 trees within parks, countryside, cemeteries and woodland blocking access or leaning onto paths.

In some areas, particularly where access is a challenge, the clear up will continue for a number of months.

Cllr Mark Wilkes, our Cabinet member for neighbourhoods and climate change, said: "We recognise that the weather has caused significant challenges to County Durham communities over the last few months. We had finally reached the end of the clear up from Storm Arwen when Storm Malik hit the region, affecting many of our households, roads and footpaths.

"Teams were quick to respond to the damage caused and have worked tirelessly to clear fallen trees and other debris from roads, footpaths and other affected areas. I would like to thank all those who have contributed to those efforts.

"However, there are many more trees which are causing issues as a result of severe storms. We can nevertheless reassure residents that our efforts are ongoing and we will not stop until all damage is repaired."