Full line up of entertainment at Empire Consett this spring

An action-packed line up of comedy, theatre and fun for all the family awaits audiences at Empire Consett this spring and summer.

The Consett venue, which we operate, opens its new season tomorrow (5 February) as Lipstick on Your Collar takes audiences back in time to the golden era of music with an evening of hits from the 1950s and 60s. 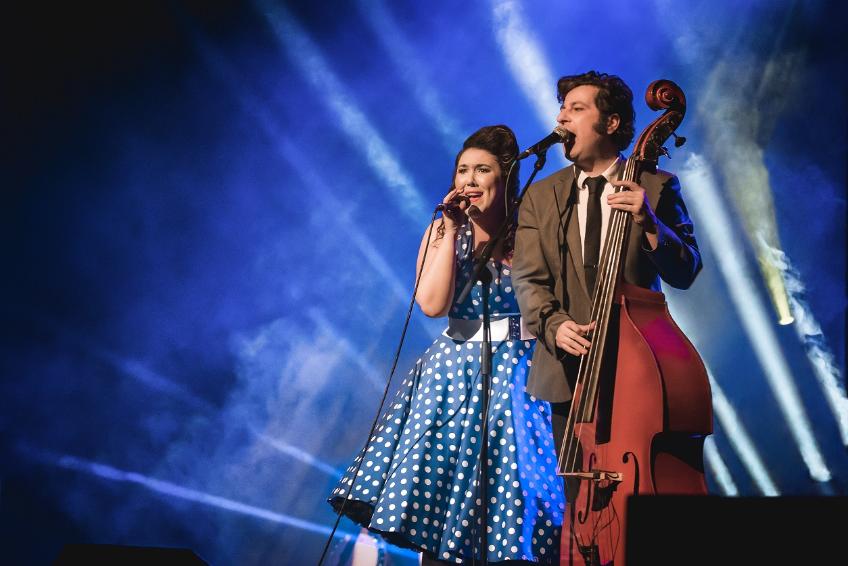 Stars from Lipstick on Your Collar

Fans of country music can enjoy A Country Night In Nashville(Friday 11 February). Performed by Dominic Halpin and the Hurricanes, it features hits from the likes of Johnny Cash, Alan Jackson, Dolly Parton, The Chicks and Willie Nelson.

There are also further music tributes with the show that has rock 'n' rolled audiences from Consett to California in Buddy Holly and The Cricketers (Saturday 5 March), a celebration of hits from The Roy Orbison Story(Saturday 12 March) and the portrayal of Frankie Valli in Frankie: The Concert(Saturday 30 April).

Empire Consett favourite Leah Bell will direct the stage adaptation of Catherine Cookson's The Cinder Path (Thursday 17 February). The fast-moving drama set against the backdrop of World War One stars Leah, Coronation Street's Charles Lawson, and a talented cast of actors and singers who will have audiences entranced from beginning to end.

Leah will also return with Jimmy Cricket and a full supporting cast to celebrate the Queen's Platinum Jubilee with A Right Royal Knees Up (Saturday 21 May), offering a nostalgic journey through the Queen's reign with show-stopping scenes, sing-a-long memories and spectacular footage.

The Magic of Motown(Thursday 10 March) takes visitors on a trip down memory lane with classics from Marvin Gaye, Diana Ross and Stevie Wonder, while live band Electric Dreams will blend pop and soft rock from the likes of Wham, Duran Duran, Culture Club and more in 80s Live(Friday 1 July).

And from writer David Kent and the producers of Hormonal Housewives and Girls Just Wanna Have Fun is the funky, feel-good Soul Sisters The Musical(Saturday 14 May), focusing on success, survival and sisterhood.

Fun for all the family

There is also fun for all the family as Olivier Award nominated duo Ian Ashpitel and Jonty Stephens present Eric & Ern(Saturday 19 March). This nostalgic show is full of Morecambe and Wise's best loved routines, songs and sketches which is sure to evoke memories of huddling around the telly as a family on a Sunday evening.

Audiences will laugh, cry and unagi on Tuesday 29 March as Friends! The Musical Parody celebrates and pokes fun at the misadventures of the group of 20-something pals in this hilarious good-hearted romp through favourite moments from the hit TV show.

There are live concerts from legends of Irish music and song The Fureys(Friday 8 April), and one of the most iconic pop, rhythm and blues bands of the 1960s, The Animals and Friendsstop by Empire Consett (Saturday 7 May) as part of their farewell tour.

Ireland's international hit recording star Dominic Kirwan also brings his new show Through The Eyes Of An Irishman where audiences can hear all of his biggest hits on Thursday 26 May, and Tony Allen embarks on a solo tour performing The Greatest Hits of Foster and Allen (Saturday 18 June) and songs from his new album.

Milkshake Live (Saturday 9 April) offers families an unforgettable time as presenters and favourites from the Channel 5 children's TV programme, including Paddington, Noddy, and Pip and Posy return to Empire Consett.

They can also enjoy a roar-some time at Dinosaur Adventure Live (Friday 5 August). After 65 million years in the making, audiences will be immersed in a world of life-like dinosaurs to enjoy the adventure of a lifetime through the Jurassic era.

Empire Consett is also launching The Comedy Store, providing two hilarious evenings of stand-up on Fridays 22 April and 17 June, showcasing sets from four of the best stand-up comedians in the UK.

'Something on offer for everyone'

Cllr Elizabeth Scott, Cabinet member for economy and partnerships, said: "Empire Consett has a fantastic line-up of shows this spring and summer. Whether you are eight or 98, there's something on offer for everyone and we can't wait to welcome visitors over the next few months.

"A key part of our bid to be named UK City of Culture 2025 is ensuring that there is a wide range of culture, stories and performances that engage all ages and that is certainly on offer at Empire Consett. We hope everyone enjoys their visit this spring and summer."

To view the full season programme and book tickets, visit Empire Theatre and Cinema - or call the box office on 03000 262 400.