Special steam train journeys, exhibitions, parades and arts and theatre events are all being planned to celebrate the 200th anniversary of the Stockton & Darlington Railway (S&DR), it has been revealed. 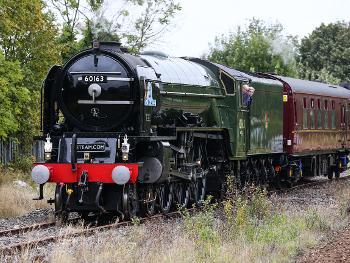 A steam-powered Tornado, which could form part of the celebrations

Opened on 27 September 1825, the S&DR's combination of steam locomotives with a line open to the public made it unique, transforming the way in which goods and people were transported right across the globe.

To mark the bicentenary of the birth of the modern railway, its story, innovators and its massive international impact, councils and groups across the region are working together to drive forward a huge series of events for local people and visitors alike. They will form part of national celebrations, attracting international attention.

At the heart of the festivities are plans for a recreation of the inaugural journey from Witton Park via Shildon and Darlington to Stockton using the replica Locomotion No.1, which could be broadcast globally and in real-time.

This will lead to the launch of a permanent visitor attraction linking museums and historical sites across the Tees Valley to Shildon.

A regular steam shuttle service between Stockton and Shildon, stopping at Darlington and crossing the Skerne Bridge could also go ahead, as well as scheduled trains being turned over to historic steam with locomotives like Tornado, Prince of Wales or Flying Scotsman replacing their modern units.

A unique collection of more than 30 early locomotives, including some from the National Railway Museum or built by Robert Stephenson & Co will be brought together as linked exhibits across several sites with the potential for a temporary "engine shed" to be built in Stockton to display some of the engines alongside those at Shildon and Darlington.

It is hoped the activity will also trigger dozens of mini-carnivals, parades and celebrations across communities along the 26-mile line, and a programme of outdoor theatre, visual arts and events will also be produced.

Schools can get in on the action with a series of projects to understand the S&DR and spark pupils' interest in technology, engineering and invention, as well as knowledge sharing events and conferences for the wider public. The celebrations will also form part of County Durham's bid to be UK City of Culture 2025.

We are also supporting our partners at the National Railway Museum with plans to build a new £5.9million collection building at Locomotion in Shildon. The new building will house up to 45 rail vehicles in addition to the 87 already on display - creating one of the world's largest collections of rail vehicles. It is due to open in 2023 and an exhibition of the plans is taking place at Locomotion between Wednesday 19 and Sunday 23 January.

Cllr Elizabeth Scott, our Cabinet member for economy and partnerships, said: "The 200th anniversary of the Stockton & Darlington Railway is an opportunity to celebrate our region's rich rail heritage and to pay tribute to the generations of residents who worked on the railways. It is also a chance to show the world that the innovative spirit of 1825 is still very much alive today by delivering a programme of activities that draws upon the creativity and talent that exists here.

"We have been working closely with our partners to do just that and it is really exciting to see the plans coming together.

"The anniversary of the S&DR is also an important part of the Durham 2025 campaign, which aims to secure UK City of Culture 2025 status for County Durham. However, the benefits of this title would extend beyond the county itself, attracting millions of visitors, boosting the economy and supporting the levelling up agenda across the North East."

Sarah Price, Head of Locomotion in Shildon, said: "This is an important moment to recognise our shared railway heritage and a chance to come together as a region to celebrate the railway story and to inspire the next generation of engineers. At Locomotion, we're investing in our site to create a lasting legacy with a new collection building, a better experience for visitors and a sustainable future for our historic buildings."

Tees Valley Mayor Ben Houchen said: "The Stockton & Darlington Railway helped put our region on the map, shaping the world thanks to its innovation and our rich rail heritage is one to be rightly applauded. That's why I've backed the project, and Darlington's Rail Heritage quarter, with £21million of funding.

"These extensive plans, touching on every part of the 26-mile line, will help educate, inspire and entertain, and give us a whole calendar of events, exhibitions and engagement to look forward to after a difficult couple of years.

"More than that, it will undoubtedly boost visitors eager to learn our story and see the historic locomotives on display, in turn supporting our other brilliant businesses. This is a celebration of national - if not international - importance and we're ready to deliver."

The plans were outlined in a Stockton-on-Tees Borough Council Cabinet report, seeking approval of the celebrations and to identify resources for delivery, which will go before Cabinet on 20 January.

Councillor Jim Beall, Stockton-on-Tees Borough Council's Cabinet Member for Health, Leisure and Culture, said: "I am pleased and proud to be part of the Board that has developed these exciting and ambitious plans for 2025, which will inspire local communities and visitors from far and wide.

"We are looking forward to continuing our preparations alongside the range of partners who are involved in this exciting project."

Working together to create a legacy

Darlington Borough Council is also pressing ahead with its plans for the £30million Rail Heritage Quarter, supported by £20million of funding from the Tees Valley Mayor and Combined Authority. Next month plans will be put to Darlington Borough Council's Cabinet to take the scheme forward. The Council has also been successful in a stage 1 bid for £2.8million of funding from the National Lottery Heritage Fund toward the project and wider programme.

Councillor Heather Scott, Leader of Darlington Borough Council, said:"The bicentenary in 2025 has long stood out as an important upcoming milestone, and it's wonderful to see a determined joint effort to mark the occasion in an appropriate way.

"We're committed to working closely with partners the full length of the 26-mile route to make the bicentenary a memorable occasion and deliver a real legacy for our communities.

"Our Rail Heritage Quarter plans will be an important piece in the 2025 jigsaw and I look forward to helping drive these plans forward."

Niall Hammond, Chair. The Friends of the Stockton & Darlington Railway, said: "In 1825 the Stockton & Darlington Railway started a worldwide economic revolution by using the inspiration and ingenuity of the people of the North-East to develop world leading skills and experience in the cutting edge technology of the day. Building on this fantastic heritage we hope the S&DR will not only provide the driving force for a memorable bicentenary year of events in 2025, but also put in a place a legacy of real value to the community, education and economy of the region which will last for many years.  After several years hard work by all the partners in the project, the Friends are excited and pleased to see real enthusiasm, funding and commitment being put into making the most of our internationally important heritage."

The bicentenary celebrations are being delivered by the S&DR Railway Heritage Partnership, which includes the Tees Valley Mayor and Combined Authority, Darlington Borough Council, Durham County Council and Stockton-on-Tees Borough Council, working alongside National Railway Museum, Historic England, Network Rail, the Friends of SDR and others.