A County Durham man who received help from a mental health group is calling on others to seek support ahead of International Men's Day. 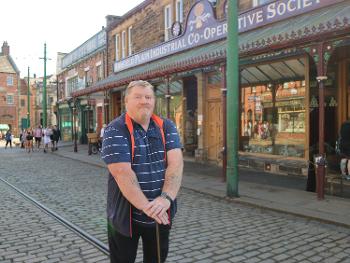 Alan Henderson, who attends a Men's Group at Beamish Museum.

Seventy-one-year-old Alan Henderson was encouraged to attend his local cree after he retired from his job working on a farm.

County Durham Cree Network, supported by us and Durham Community Action, began back in 2010 as a men's health and wellbeing project based on an Australian scheme called Men's Sheds. The idea was to provide a place where men could get together, take part in a range of activities, form friendships and seek support from one another.

Alan, who struggled with feelings of loneliness, depression and isolation after leaving work, first visited the Cree in 2017. Since then, he has made a number of new friends and experienced a significant improvement in his mental health.

Alan, from Consett, said: "I was going through a bad time when I finished work. My doctor from the mental health team asked me if I would like to join a Men's Group at Beamish Museum. I wasn't sure at first and it was a struggle to go but I went along the first week and was made really welcome.

"I found it hard but as the weeks went on I settled into the group really well. When I look back it was the best thing I have done. I would advise anyone to do it and give it a chance."

Originally set up as a place just for men, a decade after it began the County Durham Cree Network now offers opportunities for men, women, and young people to meet and participate in recreational activities of their choice with the aim of reducing social isolation, to contribute positively to members' physical and emotional health and wellbeing and strengthen networks within communities.

As well as offering support, people can also enjoy a range of fun activities, from gardening to cookery sessions and from DIY workshops to days out at attractions.

The Cree network  has recently undergone a rebrand and developed a new website which launched this month, ready for International Men's Day on Friday 19 November, which this year will promote the themes of 'Making a positive difference to the wellbeing and lives of men and boys' and 'Promoting a positive conversation about men, manhood and masculinity'.

Cllr Paul Sexton, Cabinet member for adult and health services, said: "For some people the responsibilities of daily life can lead to poor mental health. Crees traditionally provide a space where men can come together, take part in activities and share their problems with others.

"On average, crees support approximately 350 members per year. However, last year that figure rose to just over 500, reflecting the impact of the coronavirus pandemic on people's wellbeing. In such turbulent times, crees provide a vital outlet for people to improve their mental and physical health, offering a safe, communal space to people who may be experiencing poor mental health, risk of social isolation, self-harm, suicide and poor health and wellbeing."

More information about the 40 crees across County Durham, which receive support from Durham County Council's Public Health Team and Durham Community Action, can be found at the County Durham Cree Network page of our website.