Parks across County Durham have been handed Green Flag Awards after being kept in tip top shape during the past year. 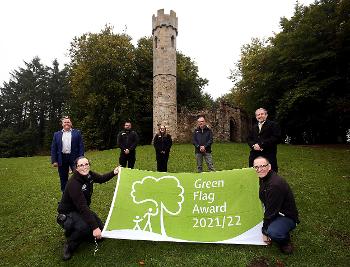 The awards recognise excellence and good practice in the management and development of parks and open spaces. Ranging from parks to cemeteries, to countryside sites and crematoria, the awards reflect the high standards of maintenance needed to keep the sites looking good and also the involvement of local communities.

The first awards were given in 1997 and the scheme continues to provide the benchmark against which parks and green spaces are measured. Judges look at criteria such as maintenance, conservation and community involvement as well as open spaces being welcoming, healthy, safe and secure.

The County Durham sites, maintained by us, which have been given Green Flag status this year are:

Blackhill and Consett Park has also been given the Green Heritage Site Award, supported by Historic England, for the management of its historic features.

Cllr Mark Wilkes, our Cabinet member for neighbourhoods and climate change, said: "A huge thank you must go to our staff and the volunteers who do a brilliant job in keeping our green spaces in such good condition.

"It's a real feather in our cap to have so many sites across County Durham recognised in this way and we're delighted they have met the required standard to be awarded Green Flag status.

"The diversity and strong community involvement of these well-maintained parks and open spaces also further evidences our compelling case to be named UK City of Culture 2025."

It has been a record-breaking year for the national Green Flag Awards, run annually by Keep Britain Tidy, as the scheme marks its Silver Jubilee with 2,127 venues celebrating success.

The flag award scheme was launched in 1996 to recognise and reward the best green spaces in the country.

Any green space that is freely accessible to the public is eligible to enter for a Green Flag Award. Awards are given on an annual basis and winners must apply each year to renew their Green Flag Award status.