Civic leaders pay tribute to HRH the Duke of Edinburgh

Civic leaders in County Durham joined the nation in remembering His Royal Highness The Duke of Edinburgh. 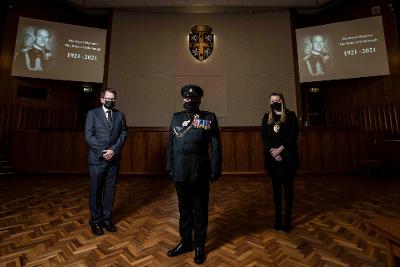 Paying tribute to HRH The Duke of Edinburgh (left to right) John Hewitt, Interim Chief Executive of the council, Major Chris Lawton, Deputy Lieutenant of County Durham and Cllr Katie Corrigan, the Chairman of the council.

Cllr Katie Corrigan, the Chairman of the council, lead a one-minute silence at County Hall, Durham, on Saturday afternoon.

Regular visitor to the county

The Duke of Edinburgh visited County Durham many times, including in 1963, when he officially opened the new County Hall on 14 October.

A plaque commemorating the event takes pride of place in the council chamber and provided the backdrop for the moment of reflection.

The silence was also observed in all other county council buildings in operation on Saturday.

Cllr Corrigan said: "His Royal Highness The Duke of Edinburgh was a frequent visitor to our area, most notably when he officially opened the new County Hall in the early 1960s.

"I hope people joined us in observing the national one-minute silence and took a moment to remember his many contributions to County Durham as well as reflecting on his life and achievements."

Flags are currently flying at half-mast at the following council buildings as a mark of respect: County Hall, Durham Town Hall, Crook Civic Centre and the council offices at Green Lane, Spennymoor.

Members of the public can leave tributes to the Duke of Edinburgh via the Royal Family's website at Royal Family - Book of Condolence.

The Royal Family is asking that members of the public consider making a donation to a charity instead of leaving floral tributes. More information is available at Royal Family: charity donations.