Postal voters are reminded to post their ballot pack today (Wednesday) in order to cast their vote in the upcoming election. If you haven't received your ballot pack and you are registered to vote by post, please contact our election helpline on 03000 261 212.

The ways in which County Durham children and young people have gone above and beyond to get creative during the coronavirus pandemic will be celebrated with a week-long event this month. 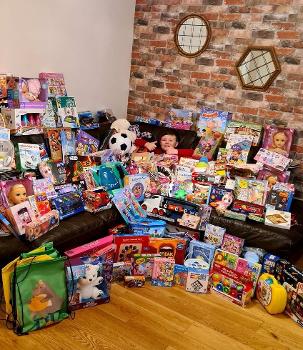 Will Coulter with the toys he collected to give to other children.

Education Durham, which is part of us, has been invited by the World Creativity and Innovation Week team, which is based in Miami, to broadcast globally as part of events from 15 April to 21 April.

To date, Education Durham has received over 80 submissions for the project from schools, community groups, police, Area Action Partnerships and children and young people. The contributions will be put together into four showcase videos shown across the week.

The final showcase on World Creativity and Innovation Day, Wednesday 21 April, will include a global live stream at 2pm.

Education Durham has been sent hundreds of pictures and videos, from inspiring poems and artwork to community fundraisers. One young person delivered over 15,000 care packages during lockdown and another led a young persons' radio station to bring young people together during what has been a difficult time.

The team is also in discussions with schools as far afield as China and Australia for a global big sing in conjunction with Durham Music Service as well as linking the county's Youth Council with a similar organisation in Durham, USA.

Other examples of innovation include one by youngster Will Coulter, who two years ago decided to make a Christmas wish to help someone less fortunate than himself. Amidst the pandemic his wish was to make another child smile. He then started collecting toys for other children and with support from his school and local community gathered a huge amount of toys that were then gifted to others.

Children at Lumley Infant and Junior School meanwhile rehearsed and recorded, in a coronavirus-safe way, 'One Moment, One People', a sing up song written by Beccy Owens.

John Pearce, our director of children and young people's services, said: "Well done to all of the children who have got creative to help others and improve their own lives during what has been a difficult past year for young people and adults alike.

"It's heartwarming to see so many children in the county acting so selflessly at such a challenging time."

To see Lumley Infant and Junior School's choir's One Moment, One People, go to the Lumley Schools Choir page on YouTube.