Enjoy the magic of panto at home with theatre's festive films

A festive story filmed in four thrilling instalments is set to deliver pantomime magic to County Durham and beyond next month. 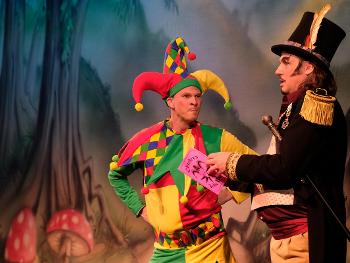 Paul Hartley, left, as Chester the Jester and Neil Armstrong as Rupert Van Rottenchops in the Gala Durham production of Snow White in 2018.

Sadly, due to the ongoing coronavirus pandemic, Gala Durham's much-loved pantomime is unable to take place this year.

However, we have teamed up with panto favourites Neil Armstrong and Paul Hartley to spread some seasonal sparkle online this year.

Split into four episodes, Rottenchops' Revenge is a comedy thriller that promises to entertain people of all ages. It sees the evil villain Rupert Von Rottenchops wreak havoc in County Durham in a captivating tale of kidnap, blackmail and all-round treachery.

Thankfully, characters from past Gala Durham pantomimes, including Aladdin, Cinderella and Jack and the Beanstalk, join forces to take him on - but will good triumph over evil?

The production will be uploaded onto the Gala Durham website at 4pm over four afternoons, from Monday 14 to Thursday 17 December.

Cllr Joy Allen, our Cabinet member for transformation, culture and tourism, said: "The Gala panto is adored by families across the region and it's such a shame it can't go ahead this year. By screening these films, we hope to create some pantomime magic for people to enjoy safely at home, at a time when we're all in need of some festive cheer.

"Neil and Paul are such talented writers and performers and I can't wait to see what surprises they have in store for us."

Neil and Paul have starred in the Gala panto for more than a decade, with Paul first gracing the stage 18 years ago. Neil, meanwhile, joined the team in 2008 and this will be the first time in 35 years that he has not performed over the Christmas period.

Six years ago, the pair took on the additional role of writing and directing the Gala production, with their talent for storytelling, jokes and a healthy dose of silliness proving a winning combination.

A smile on everyone's faces

Neil said: "We know, for many people, watching the Gala panto is a Christmas tradition and we are very sad we can't entertain you in person this year. We hope our efforts go some way to supplying a little festive cheer- albeit in a more remote fashion than any of us are used to."

Paul said: "Rottenchops' Revenge brings together some of panto's best loved characters and we've pulled out all the stops to create a story that will put a smile on everyone's faces - from little ones to teenagers, and even mam and dad. We hope this brings some Christmas magic during this difficult time and we look forward to when we can see you all in person again."

The duo will perform alongside the cast who would have starred in this year's pantomime, Robin Hood, if it had been able to go ahead. This includes the actress Millie Binks, who will take on the role of Maid Marion in the films. Neil and Paul also convinced Robin Hood's choreographer Amanda Woods, musical director Mark Thompson and the backstage crew to appear in the films, which are shot in and around Durham City.