Some of our maps, postcode lookups and My Durham may not be available over the weekend. This is due to essential maintenance.

Walkers are being advised of the rerouting of a popular coastal path in County Durham. 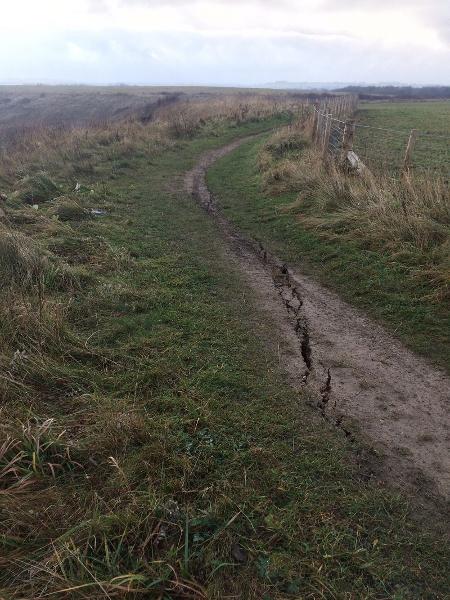 Cracks have appeared in the path near Easington Colliery

The route of the England Coast Path near Easington Colliery has been altered after a section of it had to be closed in the interests of public safety.

The section, between the Easington Colliery coastal car park and Shippersea Bay, was closed on Wednesday morning after cracks appeared in the ground.

The path has been rerouted with signs in place advising of the closure and directing walkers.

Mike Ogden, our access and rights of way team leader, said: "As soon as we were made aware of the issue with this path, we worked with the National Trust to close it as soon as possible, in the interests of public safety.

"We have put up signs to advise of the closure and also established a signposted diversion route to ensure access to the England Coast Path is not affected.

"People are advised not to enter the closed area for their own safety."

Eric Wilton, general manager for the National Trust's South of Tyne property group, said: "A section of the England Coast Path near Easington Colliery in County Durham has become unsafe due to ongoing erosion. This has been aggravated by recent wet weather.

"The National Trust is working closely with Durham County Council to reduce risk to the public. A stretch of the footpath where it heads north along the cliff tops from the nature reserve car park towards Shippersea Bay has been closed, and a diversion and safety signage put in place. We'd ask people to please follow the new route and take heed of the warning signs.

"There are currently no plans to reopen this section of the footpath as the land is still moving due to erosion. A diversion is in place for now and we'll reassess the situation once it's safe to do so. Going forward, if it can't be reopened, there is provision within the England Coast Path designation to re-route the path to a safe position; in which case the National Trust will work closely with the Durham County Council public rights of way team to do this."