"I am awfully sorry to leave you like this, Dearie, buried away in a foreign land."

Those are the words of Acting Sergeant Joseph Furness, whose heart-breaking letter will feature within a new sound and light installation in Durham City next week.

As communities come together to mark the centenary of the armistice, HOPE commemorates the faith, humanity and resilience of the people of County Durham during the First World War.

The artwork, created by Newcastle-based art and design studio Aether & Hemera, will be located outside of the Gala Theatre in Durham's Millennium Place from Friday, 9 November, to Thursday, 15 November.

Commissioned by the council, it features a large-scale text sculpture composed of hundreds of colour-changing LED tubes, along with speakers projecting voices retelling local people's experiences of the war.

Many of the stories are contained within letters, diaries and memoirs at Durham County Record Office. They are also immortalised within The Durham Hymns, a poignant musical tribute, which will be performed at the Gala Theatre on Sunday, 11 November.

Cllr Ossie Johnson, our Cabinet member for tourism, culture, leisure and rural issues, said: "As the home of Lumiere, Durham has a reputation for bringing spectacular light installations to the region.

"HOPE is the culmination of our First World War centenary activities and commemorates the resilience of County Durham people in the darkest of times. 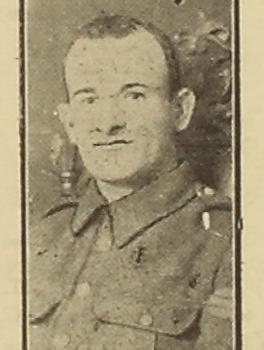 "To truly understand the power of HOPE you have got to experience it so I would urge people to go along and see it for themselves."

Born in Shildon, Joseph Furness worked in the pit until he was 19, when he joined the Durham Light Infantry in 1906. He served first with the 2nd Battalion but joined the 10th Battalion when war broke out, and was promoted to sergeant.

He died at 1.30am on 13 October 1915, after contracting pneumonia and rheumatic fever while on active duty.

Five months earlier, in June 1915, Joseph wrote a letter to his wife, Annie, which was to be delivered in the event of his death.

"I am awfully sorry to leave you like this, Dearie, buried away in a foreign land," he wrote.

"I am also sorry to be the means of causing you pain. The only request I have to make under the circumstances is that you don't grieve too much about me. And my last wish is that you marry again if you find anyone you think worthy of taking my place.

"You are still quite young and it would be a shame to spoil your life for a memory."

He went on to write: "You might kiss the bairns goodbye for me and say goodbye to mother, dad and other relations of ours."

A copy of the letter is preserved at Durham County Record Office. To read it in full, visit Durham at War: Joseph Furness

Performances of The Durham Hymns take place on Remembrance Day at 2.30pm and 7.30pm. Tickets cost £25 or £23 for concessions.