Listen to the Soldier

The Durham Light Infantry's oral history collection is the largest, most comprehensive and wide-ranging collection of recorded material in the world relating to a British infantry regiment during the Second World War. 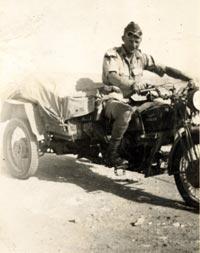 It is the result of 20 years of collaboration between the former DLI Museum and the Sound Archive of the Imperial War Museum. This collaboration has resulted in the recording of 200 interviews with veterans who served with all the battalions of the DLI during the Second World War.

These recordings cover every campaign fought by the Durhams in five years of war from the beaches of Dunkirk in 1940 to the deserts of North Africa, and from the cold mountains of Italy to D-Day and on to the final victory in Berlin. The war in India and Burma is not forgotten, nor are the smaller campaigns in Syria and on the island of Kos. There are also interviews with veterans who spent years as prisoners of war in Italy and Germany.

Above all, these recordings provide listeners with a unique insight into what it was really like to be an infantryman during the Second World War, as veterans reflect on their experiences from recruitment to active service and speak about their daily routines, food, training, uniforms, equipment, weapons, sports and off duty activities. There are also vivid descriptions of the reality of war - of fear, of wounding and of death.

Now thanks to the support and generosity of the Heritage Lottery Fund, this unique oral history collection has been fully catalogued and digitised and made available to listeners not only at the Imperial War Museum but also in County Durham at Durham County Record Office, where the DLI's archive is kept.

To complete this unique project, over two hours of recordings have been selected from the hundreds of hours of recordings and added to this on-line exhibition - 'Listen to the Soldier'. This exhibition will allow listeners to discover exactly what it was like to have served as an infantry soldier in the Second World War.

Thanks go to the Imperial War Museum for its kindness in allowing these extracts to be made freely available as part of this on-line exhibition.

Warning: These interview extracts have not been edited for content or language and may not be suitable for young people.

Listen to the Soldier is a partnership project with the Imperial War Museum.