What are Public Rights of Way?

This is the description of the various types of Public Right of Way and other commonly referred to paths and trails.

Types of Public Rights of Way in County Durham 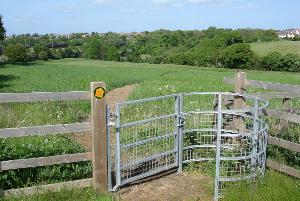 A footpath is a highway on which the public has a right of way on foot. Often, footpaths will cross fields containing livestock or crops, they may be muddy, and generally 'rural' in feel.

On a bridleway the public has a right of way on foot, on horseback, leading a horse, and on a pedal cycle. Cyclists must give way to riders and pedestrians. These routes may go across farmland, and will probably encounter gates.

On a restricted byway the public have a right of way on foot, on horseback, or leading a horse, cycling and for any vehicles other than mechanically propelled vehicles (e.g. a horse and cart).

Byways Open to all Traffic (BOATs) 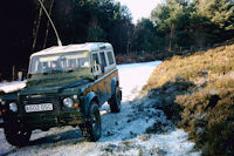 As the name suggests, these routes - often simply called byways - are for walkers, horse riders, cyclists and vehicles - including horse-drawn carriages, motorcycles and other motor vehicles. BOATs are sometimes way marked with red arrows.

Who and what are allowed on a Public Rights of Way?

Prams, wheelchairs, and dogs are considered to be 'usual accompaniments' on all Public Rights of Way. Although the law does not state that dogs must be on a lead, you should ensure your dog is under close control at all times, especially in rural areas where there is livestock. 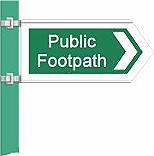 The council has a duty to place a signpost wherever a Public Right of Way leaves a surfaced road. In 2002 we carried out a signpost survey of the whole county and installed new signposts where they were missing, and replaced old or illegible ones. In rural areas we often use wooden finger posts, which are more in keeping with their surroundings. We sometimes do not place signposts in urban areas, where there would simply be too many signs.

You may have seen little metal or plastic discs displaying a coloured arrow nailed to fences, stiles or gateposts when you are out for a walk. These are known as way marks. Way marks help to indicate the route and status of a Public Rights of Way, and are as follows:

In general we will way mark if we feel it will help the path user. Way marks also help the landowner, as they assist path users in keeping to the correct line of the path, thus reducing the chances of trespass occurring. However, we do not wish to way mark every single path, as this would detract from the rural feel of many countryside routes. This is especially the case in the more remote areas of the county such as Upper Teesdale and Weardale.

These are not rights of way, but routes along which the landowner permits people to walk or ride. The permission may extend just to certain types of user, for example walkers. The permission (which may be a written agreement or just verbal) may be withdrawn by the landowner at any time. Sometimes a landowner may give permission for individuals to use a public footpath on horseback. This is lawful as long as the surface of the footpath is not damaged in any way. A large number of permissive routes have been provided in recent years under the Countryside Stewardship Scheme, which operates across England. Occasionally, farmers provide alternative routes for walkers to avoid a busy working farmyard. This is fine, as long as the definitive route is also available at all times.

Bicycles are vehicles within common law, so they can be used on roads and carriageways. They may also be used on bridleways, and designated cycle tracks. The National Cycle Network (being developed by Sustrans in partnership with local authorities and others) involves sections of cycle path and cycle lane, as well as other routes.

Cyclists and riders in County Durham have access to our valuable network of railway paths, which are managed by our Sites and Rangers team. The railway paths run along former colliery and county branch lines. They can be used by walkers, cyclists and equestrians, but not motorbikes.

A footway is a path set out beside a carriageway for pedestrians. You will see these in housing estates, and along side roads. These are generally adopted, in other words, maintained by our Highways team. The footway may not be used by either cyclists or horse riders unless a part of it has been specially set out for their use - in which case, it will be signed and may be surfaced with a different coloured tarmac. If you need to report a problem on a footway or pavement please contact us.

Some of the most minor public roads (sometimes referred to as UCRs - Unclassified County Roads) don't have a sealed surface - they are not covered in tarmac or concrete but have an earth or gravel surface or they may be cobbled. In country areas they are sometimes referred to as green lanes. Cycle riders and walkers can use these routes, as well as vehicular traffic. However, the surface may not be suitable for all users. See online Adopted Highways Map which shows all public roads/highways including UCR's

This term has no legal meaning but is often used to describe certain routes which have no sealed surface. A green lane may also be a Public Rights of Way, or it might be entirely private. If in doubt, check the Definitive Map. 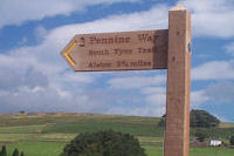 Sometimes known as long distance paths, there are a number of such routes promoted for walkers or riders by the Natural England such as the Pennine Way, which runs through parts of Upper Teesdale and the North Pennines Area of Outstanding Natural Beauty