The leaders of the seven local councils, the North of Tyne Mayor and Northumbria's Police and Crime Commissioner encourage people to work together to move out of Tier 3 as quickly and as safely as possible.

Almost 15,000 illicit cigarettes have been seized as part of enforcement work to protect the residents of County Durham, councillors will hear. 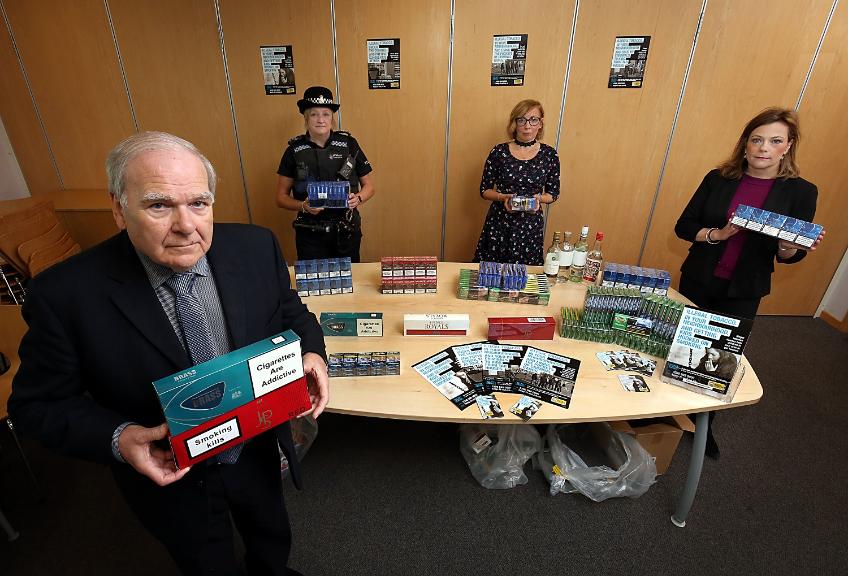 Our Cabinet will next week receive a report setting out enforcement activity undertaken by our trading standards officers in the financial year 2019/20 and of their programme for 2020/21.

We have statutory responsibility for enforcement of age restricted products, namely tobacco, spray paint containers, alcohol, videos and DVDs, cigarette lighter refills, fireworks and the proxy sale of tobacco products and supply of nicotine inhaling products to under 18s.

We work with partners including the Durham Constabulary Harm Reduction Unit, the County Durham Tobacco Alliance and tobacco control programme Fresh NE to tackle the illegal supply and misuse of alcohol and tobacco in particular, and to stop such products getting into the hands of young people and the wider population. As well as the impact these products have on people's health, they also often have links to organised crime.

The report to the Cabinet meeting on Wednesday September 16 sets out how in 2019/20, a total of 14,890 cigarettes and 41.5kg of hand rolling tobacco were seized as a result of 14 targeted operations led by trading standards in response to intelligence.

In the same period in relation to illicit tobacco, one custodial sentence totalling 30 months was imposed by a court in addition to other successful prosecutions by us and the issuing of cautions, while £37,000 was confiscated in two incidents under the Proceeds of Crime Act.

The report also covers how trading standards works with the harm reduction unit in responding to allegations of underage sales from licensed retail premises. In response to complaints or intelligence, a total of 46 test purchases were attempted in relation to alcohol. The report sets out how seven premises were subject to reviews of their license by us as a consequence, with tougher conditions being imposed on four.

The report also covers how we supported the relaunch of the Keep it Out campaign, which raises awareness of the harms of illegal tobacco, particularly in relation to its availability to young people.

Cabinet will be told that the enforcement programme for 2020/2021 involves continuing an intelligence led approach to underage sales enforcement and illegal tobacco, delivering enforcement where possible; and working in partnership with police and other enforcement agencies to identify and disrupt the involvement of organised criminality in the illicit tobacco supply chain.

The programme also entails continuing to work with the harm reduction unit and other agencies to solve problems associated with the accessibility and misuse of age restricted products; and with partners to tackle sales from private premises to children, particularly in relation to alcohol and tobacco.

It also involves continuing to review the licences of premises which sell alcohol to the underaged; and continuing work to tackle health inequalities and anti-social behaviour associated with the misuse and illegal supply of age-restricted products, in particular alcohol and tobacco.

Cllr Brian Stephens, our Cabinet member for neighbourhoods and partnerships, said: "We are committed to doing everything we can with our partners to tackle the supply and misuse of illicit tobacco, alcohol and other such products in County Durham.

"Such items can be very damaging to people's health as well as having links to organised crime and that is why adopt a zero tolerance approach whether that be prosecutions or reviewing the licences of premises.

"Underage sales put at risk our young people whose health and wellbeing is a key priority for us. We are doing everything we can to protect them and the number of test purchases we have carried out is proof of that.

"We remain recommitted to continuing our enforcement approach and to working with partners to keep residents safe."

Ailsa Rutter OBE, director of Fresh NE, said: "Local authorities such as Durham County Council play a hugely important role in addressing issues like illegal tobacco and underage sales as part of broader efforts to reduce smoking rates and we welcome this enforcement plan. Nobody wants their kids to start smoking because all tobacco - no matter where it's bought or sold - will kill at least half of long term smokers.

"Illegal tobacco is a problem as it fuels children getting hooked - dealers don't care who they sell to. But while illegal tobacco is still a problem in some areas, the positive news is that we have seen a reduction in the illegal tobacco market and the proportion of smokers who buy it over the past decade. Durham County Council has been a key partner in the Keep it Out campaign and we would encourage local people to take action and report illegal tobacco dealers anonymously at https://keep-it-out.co.uk or by telephoning 0300 999 0000."

Sarah Norman, drug intervention coordinator/controlled drug liaison officer at the harm reduction unit, said: "Durham Constabulary's Harm Reduction Unit works in partnership with Durham County Council to use a cross agency range of enforcement powers as well as targeted education to tackle the harm these products cause to our communities and their links to organised crime. This multi-agency approach proves very effective and also assists to reduce the health inequalities caused by alcohol and tobacco."