A woman who was caught with hundreds of items of counterfeit clothing and footwear which she was selling on Facebook has been ordered to pay more than £2,500. 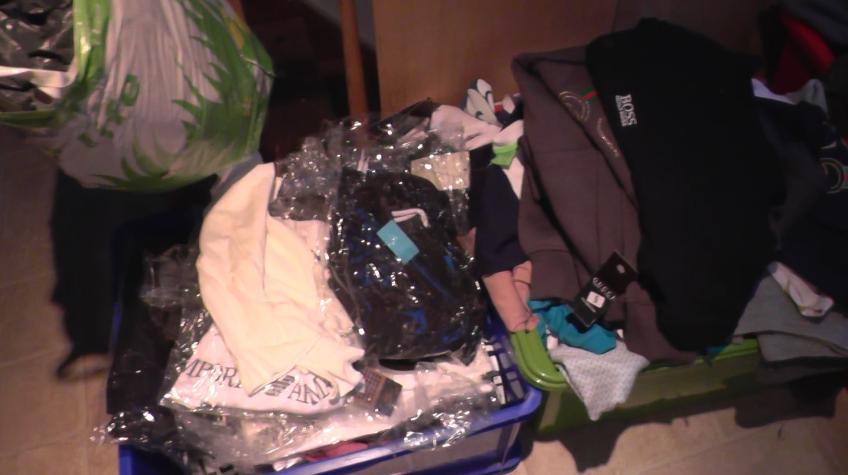 Some of the counterfeit goods at Hubert's home

Claire Hubert, 40, from Leadgate, has been successfully prosecuted by us, while we have also paved the way for some of the items to be reused for the benefit of disadvantaged young people.

Hubert appeared at Newton Aycliffe Magistrates Court where she pleaded guilty to ten charges under the Trade Marks Act 1994.

The court was told how our trading standards team executed a search warrant at the defendant's West Street home in October last year.

Over 720 items of clothing and accessories from 59 brands were found in nearly every room of the property.  The loft area was entirely filled with counterfeit products which were "displayed as you would expect to see in a retail premises," our solicitor outlined. Footwear was displayed on top of boxes and many items bore price tags.

Hubert, who was present during the raid, was using Facebook pages to advertise the goods for sale.

Samples of the items seized were examined by representatives of the relevant brands and found to be counterfeit.

Hubert attended an interview but did not respond to questioning. She later prepared a statement in which she admitted supplying counterfeit goods.

The video contains no audio track.

The defendant said it started when she bought a few items of counterfeit goods during a trip to Manchester. Things then escalated and more goods were bought from the city.

Hubert said she had also bought counterfeit goods from Turkey and sold the goods to her friends via Facebook.

In court, we applied for the items seized which can be debranded to be given to a charity which provides sports kit to disadvantaged young people.

In Hubert's defence, magistrates heard people buying the goods from her knew they were not genuine and that she had not benefited massively financially from doing so.

The court was also told Hubert is unsure what will happen to her job as a result of the prosecution.

They also ordered the forfeiture of the goods and the destruction of those which can not be debranded.

Hubert was told she had been very foolish.

Owen Cleugh, our consumer protection manager, said: "Our officers found more than 700 fake items that had been made to look as though they had been produced by top fashion brands, and the loft of the property was like a shop.

"Ms Hubert was gaining financially from selling the items on Facebook and her actions were potentially damaging to consumers who were at risk of buying lower quality goods.

"They also had an impact on the wider economy with the potential to cause loss of business to both rate-paying shops and the fashion brands whose goods were being copied.

"We hope the financial penalty in this case will deter anyone from dealing in counterfeit goods and we are also pleased that some of the items our officers seized will be able to be reused for the benefit of disadvantaged young people."