A builder who caused a couple to lose £33,000 through defective and incomplete work at their home has been ordered to compensate them in full. 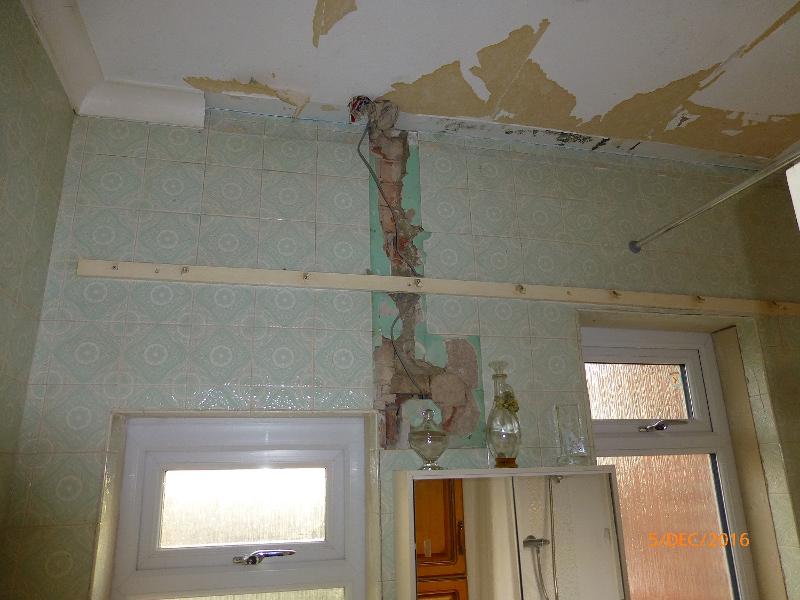 Some of the work carried out at the couple's home

Simon McLean, who was paid more than £86,000 by the couple including a loan of £13,000 which was not reimbursed, has also been given a suspended prison sentence and ordered to carry out 200 hours of unpaid work, following the successful prosecution by us.

McLean, 42, of Maple Crescent in Crook, appeared at Durham Crown Court for sentencing on Monday, having previously pleaded guilty to four charges. These were engaging in commercial practice which was misleading; misleading by omission; and without due diligence; and possessing criminal property.

The court heard how the defendant, who trades as Simon McLean Building and Roofing Contractors, attended the couple's home at Murton in June 2015. They discussed work to the property including the creation of a loft bedroom.

Following the visit, McLean sent the couple a quote for £17,950. An initial payment of £7,950 was made following which work began.

However as it progressed it became apparent that aspects of the quality of the workmanship were very poor, with the roof and sides of the bedroom too low.

When challenged, McLean blamed one of his three labourers. The height of the roof and sides were raised, but the beams over the roof were found to be inadequate, with these having to be replaced.

Furthermore, stairs were installed which did not fit, resulting in two more having to be added which differed in size. The stairs did not comply with building regulations and were unsafe, with the couple having to carry out work to rectify this.

The court was also told how the house was rewired but that certification for this was not provided and that more work and additional extras were identified for which McLean was paid.

McLean had described two of the men carrying out work for him as roofers. However two of the three confirmed they were not builders by trade and did not hold any appropriate qualifications to carry out that type of work.

Furthermore the couple claimed the defendant failed to tell them he had been declared bankrupt.

The court also heard that in January 2016, McLean advised the couple he had used all the money paid to him. He said they could either lend him additional money or he would leave the job incomplete. The couple paid the defendant £13,000 following which McLean continued work for a short period.

Work was not finished by the end of March 2016 and the defendant failed to return to complete it. In total the couple paid McLean £86,870 with the loan not repaid.

One of our building control officers visited the property in 2017 and found a handrail and guarding did not comply with regulations.

A chartered building surveyor also examined the property and found there had been minor overcharging for work, leading to the couple having paid £10,000 more than it was actually worth. The surveyor also concluded that electrical work had been carried out by someone lacking the skills and expertise required. He estimated that the couple might have to pay more than £20,000 to correct defective work.

The defendant was arrested and interviewed in November 2016. He said the couple had kept adding extra work and that a lot of the extra costs went on wages.

McLean accepted there was bad management on his part but said he employed people who "could turn out a good job." He disputed there ever being a loan but accepted there was a conversation where he told the couple he had ran out of money to complete the work.

The defendant claimed he had told them when he was declared bankrupt.

McLean was ordered to pay compensation of £33,000 - £15,000 of which has already been paid back - and given an eight month prison sentence, suspended for two years. He was also given a community order with the requirement to carry out unpaid work, and told to pay £3,000 towards prosecution costs.

Owen Clough, our consumer protection manager, said: "The victims in this case put their faith in Mr McLean to carry out the work they had discussed and paid him more than £86,000 overall.

"However the defendant betrayed their trust by overcharging them, carrying out sub-standard work, asking them for a loan that he did not pay back and ultimately not finishing the job, with the whole episode leaving the couple massively out of pocket.

"I hope the prosecution and sentence will serve as a warning to rogue traders of what can happen if they try and operate in County Durham.

"I would also encourage anyone who is cold-called by tradesmen not to sign up to anything on the spur of the moment - take time to think through what you are being offered, obtain an itemised quotation for what work would be done and also at least three quotes from different traders. Only when you are satisfied that the trader has the necessary skills and experience to carry out the work should you commit to them starting work on your property."

Anyone who has concerns about a trader and the work they have carried out should contact the Citizens Advice consumer helpline on 03454 040506.