Organisers declared Lumiere a resounding success as the fifth Lumiere festival in Durham drew to a close last night, Sunday 19 November 2017 at 11.00pm.

First estimates indicate that around 240,000 people visited the free festival over the past four nights, many of whom explored the outer reaches of the footprint to discover some of the most popular artworks such as What Matters, Cosmic Architecture, and For The Birds. Lumiere proved popular with children throughout the weekend

Lumiere is produced by Artichoke, the UK's leading producers of art in the public realm, and commissioned by ourselves with additional support from Arts Council England, Durham University and a host of further funders and supporters.

Since its inception in 2009, Lumiere has transformed Durham City into a nocturnal art gallery every two years. For the 2017 edition, 29 spectacular artworks and installations created an illuminated trail right across the city.

Iconic Durham landmarks were amongst the sites transformed by art, including the city's historic Cathedral which Spanish artist Pablo Valbuena turned into a vast synchronised artwork of sound and light. The beautiful Miners' Hall at Redhills was brought to life by an exciting 3-D video-mapped piece by Shared Space & Light, featuring real-life stories from the workers in the police, fire and health services.

Top visitor favourites included the mesmerising Frequencies by Finnish artist Kari Kola, that stretched along the Riverside under the Cathedral up to Durham Castle. Another firm favourite was For The Birds in Durham University's Botanic Garden, an enchanting collection of more than twenty light and sound installations inspired by birdlife.

Families enjoyed the interactive installations at Walkergate, Prince Bishops Shopping Centre and Millennium Place, where hundreds tweeted their "love" for Lumiere  in response to Aidan Moesby's periodic table of emotions: Sagacity. At Milburngate, the vast kinetic fire installation, Fire Tornado by Ivo Schoofs drew enthusiastic crowds, whilst others contemplated quieter more serene works, such as Drawn in Light at Elvet Bridge, What Matters at St Oswald's, and White Line by Adam Frelin, a deceptively simple installation that elegantly retraced a former bridge over the River Wear. The programme included something for everyone

This year's programme had a strong international element once again, with artists from around the world, including the United States and Canada, Spain, Holland, Sweden, Finland, as well as the UK. More than half of the installations were outside of the main ticketed area of the central Peninsula.

In his first UK commission, Spanish artist, Pablo Valbuena transformed the interior and exterior of Durham's world famous Cathedral with Methods. Inspired by the tradition of English change-ringing, which dates back to the 17th century, Methods live bellringing triggered lights in time to the sequence. Led by Durham Cathedral's Bell Major, Christopher Crabtree, 60 bellringers from the North East and beyond performed live for six hours each night of the festival.

Volunteers from the Chester-le-Street Area Action Partnership joined others in helping to plant a field of over 15,000 illuminated stems for Rami Bebawi's Entre les rangs in the Cathedral Cloister. More than 70 local public-service workers, from firefighters and refuse workers to teachers and police officers, were filmed for The Common Good, at the Miners' Hall at Redhills. British artist Hannah Fox collected the digital data of 66 local volunteers aged 5 to 78, videomapping their facial expressions to create Our Moon, a moon face that watched over the city from the walls of Durham Castle, ageing with each festival night.

The BRILLIANT commission showcased the talent of five local artists, including Aidan Moesby, Chris Plant and Amy Welch, who took patterns within Durham Cathedral for her inspiration. Emma Boyes' creation at Durham railway station drew on the heritage of the North East while Finola Finn suspended a throbbing red heart inside The Count's House exploring ideas of the self. 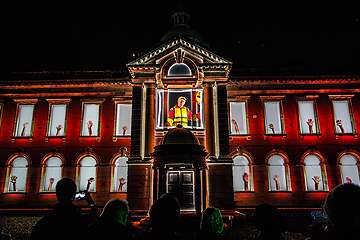 Local people have participated throughout

Supported by Wellcome, Cosmoscope was the culmination of two years of research by a team of artists and scientists, led by Simeon Nelson and including academics from Durham University's Institute for Computational Cosmology. The full process involved 700 primary school pupils from 25 schools across the county who participated in workshops designed to get them thinking about science. The ambitious sound and light sculpture used over 12,000 LED lights and an impressive soundscape, to explore our place in the universe.

Also responding to scientific questions in relation to the universe, Cosmic Architecture delighted crowds at the Ogden Centre for Fundamental Physics at Durham University's Science site, eliciting rounds of applause after each show. Projected onto the building, the video-mapped sound and light work presented a mesmerising illustration of the marriage between the contemporary architecture and the expert level of scientific research that takes place on a daily basis inside the building.

To coincide with the fifth edition of Lumiere, Artichoke hosted a one-day conference at Durham's Gala Theatre, in association with us and supported by the European Commission. On Friday 17 November, audiences heard from range of visionary and renowned speakers including artists, producers, academics and thinkers, who shared their experiences, expertise and opinions on the role of culture in our changing world.

Helen Marriage, CEO of Artichoke, said: "I think this has been my favourite Lumiere festival so far. Part of the joy of programming this festival is thinking about ways to keep it fresh and new each time, and I think we really have achieved that.

"Of course some pieces appealed to some more than others, but with 29 separate installations, I think Lumiere offered something for everyone. At the same time we continued to push the boundaries of what is possible, including creating Pablo Valbuena's once-in-a-lifetime work at Durham Cathedral - an extraordinary technical feat of synchronicity, involving 60 bellringers triggering lights and exploring this iconic building as an artwork in its own right. A total of 29 installations wowed visitors to the city

"As always the support we have had from our commissioner, Durham County Council, has been exceptional, and the involvement of local people at every level, from participating in artworks to the 315 who volunteered as festival-makers has been exemplary. We couldn't do this without the support of all our wonderful funders and sponsors, and I can't say thank you enough to them for making Lumiere possible"

Cllr Simon Henig, leader of Durham County Council, said: "Lumiere has once again offered us the chance to showcase our beautiful city, our unique history and heritage and our wonderful people on a world stage. I am also delighted that, as always, the public have shown their huge affection for this event by turning out in the tens of thousands to enjoy the 29 artworks that have illuminated Durham City in new and exciting ways.

"Together the five editions of Lumiere have seen more than 800,000 people counted through the peninsula entry points alone and I anticipate that the £21 million in economic benefits delivered by the first four festivals will rise significantly once we evaluate the 2017 edition. Around 1,300 people have also had the chance to be part of the event thanks to the community outreach programme, which can provide life-changing opportunities.

"We have also hosted guests from as far apart as Canada, Switzerland, Senegal and Russia. This is without doubt the most international of the Lumiere events we have hosted and I would like to thanks the public, volunteers, staff and of course Artichoke for another truly world class event."

Lumiere returns to London 18-21 January 2018 for the second edition of the festival in the city, commissioned by the Mayor of London. Taking place across an expanded footprint which includes King's Cross, London's West End, and across the river on the bustling Southbank, over 40 works by leading international and UK artists to go on display for four nights.